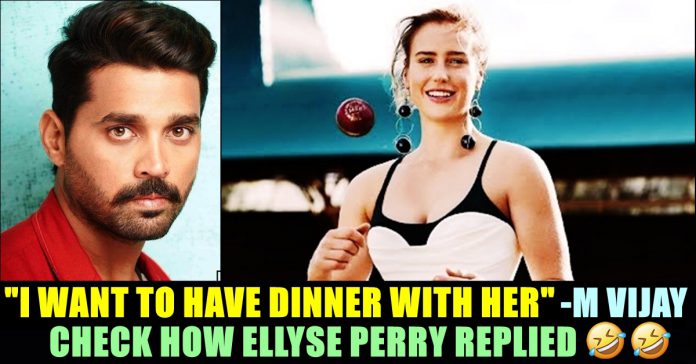 Not many days ago Murali Vijay expressed his wish of having dinner with Ellyse Perry as she is beautiful. Many memes and trolls surfaced against the Chennai Super Kings opener. Now, Ellyse herself has replied to the invite of the 36 year old cricketer, video of which is doing rounds in social media platforms.

“Ellyse Perry. I want to have dinner with her. She is so beautiful. And Shikar Dhawan any day. He is a fun guy. Just that he will speak Hindi and I will be conversing in Tamil” Murali Vijay said in that conversation. Now, through a live interaction conducted by sony ten, Ellyse has replied to the invite in a cool manner.

As soon as she was informed about the wish of the India cricketer, Ellyse instantly replied by saying “I hope he is paying. (laughs). If that’s the case. It’s very kind of him. I’m flattered”

When Vijay made this proposal, several memes surfaced in the microblogging site making fun of the cricketer.

Vijay debuted in ODIs against South Africa in the third and final one dayer on 27 Feb 2010. He played for IPL franchise from his home town Chennai Super Kings till the sixth edition and represented Delhi Daredevils in IPL season 7. He was one of the key performers for Chennai in the 3rd edition of IPL in 2010 when Chennai were crowned champions. His first century for Chennai Super Kings was in the third season of the IPL where he scored 127 runs off 56 balls against the Rajasthan Royals.