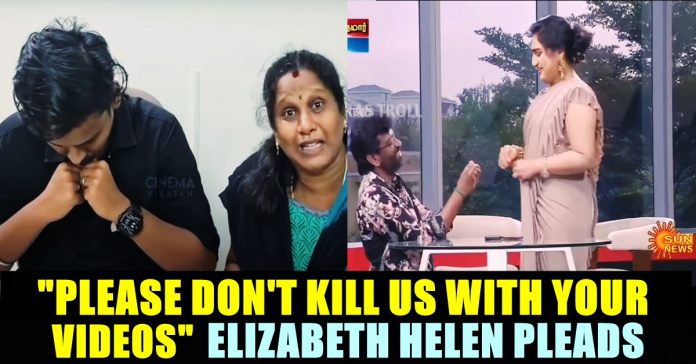 Elizabeth voluntarily recorded a video and shared it to media platforms sharing the trauma she is going through while seeing the videos being released by Vanitha Vijayakumar and Peter Paul. She says that people in her neighbourhood are humiliating her after seeing the videos of Vanitha and Peter Paul in her youtube channel and in other TV channels.

Elizabeth says that people are mentioning the “Kissing videos” of Vanitha and Peter Paul to her son Edward to humiliate him. “They are asking him why his father missed to kiss Vanitha on his birthday.” Elizabeth breaks out into tears. “I can’t sleep, eat or think. The only thing I can able to do nowadays is lament like a mad woman.” Elizabeth says.

“I can’t even go to job nowadays. They are assassinating my character based on what he (Peter Paul) said in that interview. Men are approaching me with bad intentions and trying to abuse me on knowing that I don’t have a husband.” says Elizabeth.

“When I am concentrated on my children’s studies and their well-being, they are constantly releasing videos and hurting me. Videos of them kissing, celebrating birthday and behaving like husband and wife are hurting us the most. Yesterday, they are appearing in SUN TV as husband and wife. Do they want us to die ? Before going to court, are you expecting us to die ?? I am ready to die for getting married to him but how can I kill my own children by feeding them poison ?” she asks.

“Even if we die, they will say that it is for publicity. If I die, I want no one of you to attend the funeral. No woman should face this kind of situation in her life. We are approaching station and court for justice but before that the videos they are publishing are hurting. We couldn’t even go out. People who supported us were also misled by her. Everyone forgot us now” said Helen who added that she never cared about money.

Elizabeth Helen condemned Vanitha and Peter paul appearing in public events as couple asked her to wind up her channel. Edward John, son of Elizabeth Helen and Peter Paul, while talking, expressed his disappointment over his father not responding to his birthday wish. He asked Peter paul why he is not caring for his little sister. The final year student also said that he is getting suicidal thoughts. “If I fall on your feet, will you leave my father ??” asked John to Vanitha Vijayakumar.

It all started when Vanitha Vijayakumar and Peter paul conducted a marriage like ceremony in Vanitha’s house. Many celebrities including Kasthuri, Lakshmy Ramakrishnan, Ravinder came in supporting Elizabeth. Vanitha claims that it is their personal issue and no one should have a say in it unless court and law.

Previous articleVishal Facing Severe Criticism For Sharing The Medicines That Cured Him From COVID 19 !!
Next articleFirst Tamil Cinema Celebrity To Raise Voice Against EIA 2020 !!

On the evening of Saturday, Tamil film actor Suriya came up with a press note condemning the "NEET" examination saying that it ruins the...

Famous youtuber Armaan Malik who is enjoying 1.5 million followers for his YouTube channel, is getting brutally trolled by the online users after revealing...