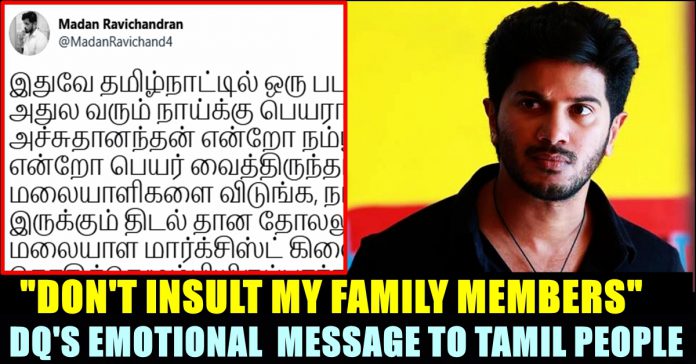 Not many days ago, a woman accused the makers of “Varane Avashyamund” for using her pictures without her consent in the movie. She asked Dulquer Salman to remove or blur the scene and demanded an apology. Now, the film got into another controversy where many people accusing it for hurting the sentiments of Tamil people by keeping a popular leader’s name as dog’s name. These controversies are taking place once the film got released on Netflix.

It all started when Dulquer shared a particular scene from his movie to promote it with a caption saying “What is the funniest dog name you have heard ? Ours is definitely Prabhakaran. Here’s the scene from Varane Avashyamund” he said in his post.

Though Dulquer deleted the post, screenshot of the same is doing rounds in social media platforms. Here’s his post :

This post from the actor hurt the sentiments of people who see LTTE founder Prabhakaran as their beloved leader. Thiruvenkadam Velupillai Prabhakaran was the founder and leader of the Liberation Tigers of Tamil Eelam (the LTTE or the Tamil Tigers), a militant organization that sought to create an independent Tamil state in the north and east of Sri Lanka.By then, the LTTE also known as the Tamil Tigers controlled large swathes of land in the north and east of the country, running a de facto state with Prabhakaran serving as its leader.

Many people expressed their disagreement with people calling their dog by his name. Check out some of their reactions below :

In a way of responding to these posts, Dulquer came up with a clarification saying that the name “Prabhakaraa” was used only as a reference to an old comedy scene in a Malayalam movie “Pattana Pravesham”. The actor wrote “To all those who were offended. I apologise. And I also apologise on behalf of #VaraneAvashyamund and @DQsWayfarerFilm! This is the reference to the joke in question. The 1988 film “Pattana Pravesham”. in his tweet adding the video clip.

To all those who were offended. I apologise. And I also apologise on behalf of #VaraneAvashyamund and @DQsWayfarerFilm ! This is the reference to the joke in question. The 1988 film “Pattana Pravesham”. pic.twitter.com/7fQrrJRU7u

Followed by this, the actor came up with a long note explaining that it was not intentional. He said that the name is a common name in Kerala and it wasn’t directed at any person living or dead as said in their disclaimer in the beginning of the film. He pointed out that most people are portraying it bad only to spread hatred without watching the film. He asked people not to spew hatred at their fathers and senior actors. He firmly said that it was a genuine misunderstanding through his post. “Some of you are being extremely abusive, threatening, deliberately hurtful and insulting family along with us. I wish that weren’t so.” he wrote in his post.

“To all those who were offended. I apologise. And I also apologise on behalf of #VaraneAvashyamund and @DQsWayfarerFilm” he wrote while sharing the post :

To all those who were offended. I apologise. And I also apologise on behalf of #VaraneAvashyamund and @DQsWayfarerFilm ! pic.twitter.com/erbjftlNbj

Comment your views on these clarifications of the actor !!

Previous articleFans Made Malavika Mohanan To Delete Her Tweet Twice ??
Next articleVivek Compares The Famous Delhi Couple With His Popular Comedy !!

A video of Dhanalakshmi requesting Bigg Boss not to send her out based on her recent behaviour is being widely shared by the viewers...