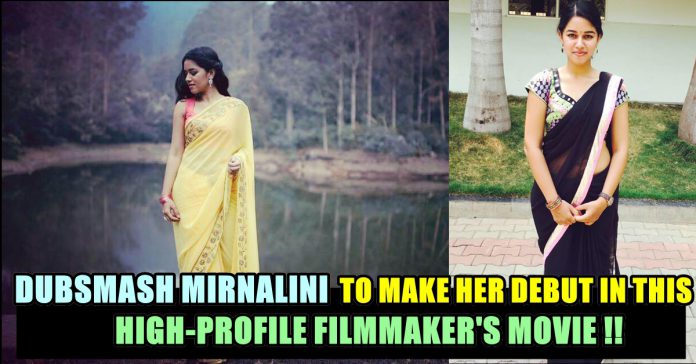 Dubsmash Fame Mirnalini Is All Set To Make Her Debut On This BIG Director’s Film !!

Mirnalini Ravi, a popular Dudsmash artist is all set to take a plunge into Kollywood. The young girl whose name is quite popular in Dubsmash circle conquering a great fan following on social media is all set to make her debut in Kollywood. The shooting of director Suseendran’s next titled ‘Champion’ that is based on football, starts from today. The small boy Roshan, who acted in ‘Aadhalal Kaadhal Seiveer’ will be acting in the film and will be playing the lead hero’s younger version. Mirnalini is making her debut as a heroine in this sports film. The film also stars ‘Anjathea’ fame Narean, GK Reddy and Jayaprakash in important roles. The film is slated to hit the screen in December this year. The film has music by Arrol Corelli and camera by Sujith Sarang. Earlier, Suseenthiran made a film on Kabadi in his directional debut, ‘Vennila Kabadi Kuzhu’ and on Cricket in 2014 with ‘Jeeva’ starring Vishnu Vishal and Sri Divya. He expressed the struggles faced by the poor or middle-class sports players in both these films.

“Ask These To The One Whom You Voted For” Female Celebrity’s Fitting Reply !!

Random guys sneaking into the social media accounts of cinema celebrities only to spread hatred is increasing day by day. Social media is...

In an interaction with his Instagram followers, Music composer Yuvan Shankar Raja, answered to many of their interesting questions. Yuvan who composed music for...