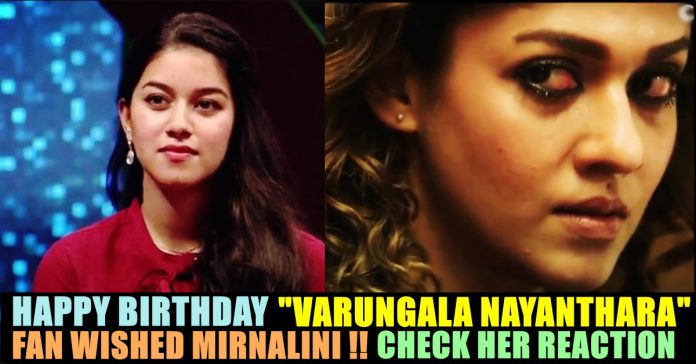 Mirnalini Ravi, a popular Dubsmash artist who debuted into Kollywood through Thiagaraja Kumararaja’s Super Deluxe celebrating her birthday today. The young girl whose name is quite popular in Dubsmash circle conquering a great fan following on social media is receiving wishes from all over the social media.

Not long before she became famous, the film offers started to knock her doors, and she made her breakthrough with the film Nagal. In 2019, she starred in Super Deluxe alongside Vijay Sethupathi and Samantha Akkineni. In the movie Mirnalini appeared in a character of an Alien from another universe. This is the first time in a Tamil filma  character of an Alien featured. She has over 380K followers on Instagram and over 250K followers on Facebook.

Apart from Super deluxe, Mirnalini has acted in Suseenthran’s directorial “Champion”. It is an upcoming Indian Tamil language sports drama film written and directed by Suseenthiran. The music for the film is composed by Arrol Corelli while cinematography is handled by Sujith Sarang.

Mirnalini who is rumoured to be participated in upcoming Bigg Boss tamil season is very busy today thanking for the wishes from the media houses, friends and well wishers.

Meanwhile one of a twitter handle wished her by calling her as Nayanthara. The wishes from the twitter page read as “Wishing Varungala Nayanthara A Very Happy Birthday !”

In a way of accepting the tag name Mirnalini thanked them through her twitter page. Check out her thanking tweet here :

Mirnalini is yet to make her Telugu debut in Harish Shankar’s Valmiki, the Telugu version of hit Tamil film Jigarthanda. Mirnalini might reprise Lakshmi Menon’s role, which also has actor Atharva Murali playing an important role.

After graduation, she briefly worked as a software engineer in a leading IT company in Bangalore before landing the lead role in the Tamil film Nagal. In 2016, she won the Favorite Dubsmasher (Female) award at Smile Settai’s first Annual Awards. Mirnalini Ravi has featured on the cover of Focus lifestyle magazine in September 2017.

What do you think on Mirnalini being called as Nayanthara ?? Comment your views below !!

Previous articleDhanush’s Emotional Message To All His Fans On Completing 17 Years In Film Industry !!
Next article“I’m Disappointed That You Missed Purple Cap” Said Fan !! Here’s How Imran Tahir Reacted !!

Remember Abarnathi, One Of The 5 Finalists In “Enga Veetu Mappillai” ?? Check How She Wished Arya On His Birthday !!

Enga Veetu Mapillai is one of the recent sensational show in TamilNadu. The show featured in Color’s TV is a reality show in which...