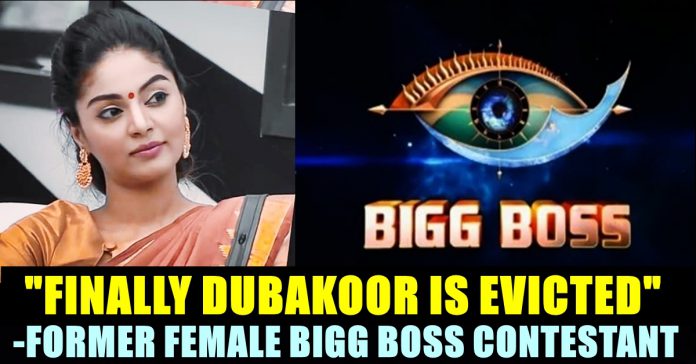 While many people are expressing their shock over Sanam shetty’s unexpected eviction, Meera Mitun, former Bigg Boss contestant has posted a tweet trolling the model after her eviction. Former Bigg Boss contestants Abhirami Venkatachalam, Kasthuri Shankar uploaded posts saying that Sanam’s eviction is unfair. However, controversial contestant Meera mitun had mocked Sanam shetty to whom she handed over her pageant title due to an issue.

Sanam shetty’s eviction from Bigg Boss show raised so many questions in social media platforms. Along with thousands of Bigg Boss followers, former Bigg Boss contestants also started questioning the authenticity of the voting system. Actress Kasthuri who participated in the third season of the show, posted a tweet condemning the channel for evicting Sanam shetty on the 63rd day.

Sanam got nominated along with Aari Arjunan, Ramya Pandiyan, Aajeedh, Shivani Narayanan, Aranthangi Nisha and Anitha sampath. When public highly believed that Aajeedh, Shivani or Nisha going to get evicted, surprisingly Sanam shetty got evicted from the show. After knowing about Sanam’s eviction, online fans who are keenly following the show, has been expressing their disappointment. Many said that they won’t follow the show due to Sanam’s eviction. Hashtags such as “No Sanam No Bigg Boss” trended in the micro blogging social media site.

Sanam shetty, a model by profession said that she has been trying to take part in the Bigg Boss show for past three seasons and always gave her best to stay inside the house. Last week, for showing her determination in the topple task, Kamal Haasan appreciated her. Sanam gained a fan following for herself by raising voice in the issues that are taking place in the house. Last week, she confronted Balaji Murugadoss while performing a task provided by Bigg Boss. Sanam thanked Kamal with her whole heart for supporting her regarding the issue.

While getting evicted, Sanam felt grateful to Bigg Boss show and Kamal Haasan. She who believed that her eviction is a decision provided by public, left the show with a hope of having a bright future. Now, on seeing her eviction, Meera Mitun, former Bigg Boss contestant posted a tweet mocking her.

This tweet didn’t go well with the users of twitter users. Check out some of the reactions :

Ha ha, can understand. Stomach firing for u aftr seeing public's love for her.

See how much love ❤️ she earned from people. This is her victory ✌️save your burning stomach. pic.twitter.com/vWEV6586b3

She stayed 60 days atleast..plz watch her eviction video and housemates BB send-off for Sanam. Vayiru yeriyattum.. her exit is very graceful and nice ..not like urs

Do you remember how you were thrown out ??? This proves sanam is the winner and apt replacement for title

She came out by winning people's hearts… Many people literally cried when she came out.. But when u came out everyone felt happy.. Don't play with her feelings

WATCH : Hardik Pandya Is In The Receiving End For Abusing His Senior!!

Hardik Pandya who is currently captaining the new team Gujarat Titans in the ongoing IPL edition, is in the receiving end for abusing his...

Video of a bunch of school girls fighting with each allegedly over a boy is doing rounds in social media platforms with various kind...