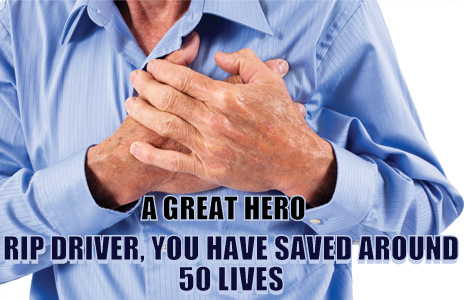 CHENNAI: Swooning after a heart attack, a 51-year-old bus driver kept calm, pulled over and stopped the vehicle to keep at least 50 passengers from harm, before he died in Maduravoyal on Thursday.
Sarvesvaran, an MTC driver, worked on the Koyambedu-Kancheepuram route. As the bus approached Maduravoyal market at 8.30am, he appeared to be in distress and halted on the side of the road, witnesses told police. Sarvesvaran attempted to get to a hospital nearby but fell down dead before he could receive medical attention.
A police officer said the hospital doctors rushed to Sarvesvaran’s side but he had lost all vital signs by the time.
“The bus left Koyambedu bus terminus with about 50 passengers around 8.20am,” the officer said. “As the vehicle was passing through Maduravoyal, Sarvesvaran par ked the bus on the side of the road and told the conductor and passengers that he was not feeling well. He got down and walked towards a private hospital but collapsed after a few paces.”
He said the conductor and a few passengers went along with Sarvesvaran to help him get to the hospital. They alerted doctors in the hospital who ran to his side but by then it was too late. The doctors said the driver died of a massive heart attack.
The Maduravoyal police arrived and informed Sarvesvaran’s family about the death. The passengers stayed at the hospital till his relatives arrived, telling doctors and police that Sarvesvaran had saved their lives.
“We are checking with MTC officials to see if Sarvesvaran had done overtime or was under stress since doctors told us that could have led to the heart attack,” the officer said.

Previous articleWhat is the origin of Valentine’s week?
Next articleKumbakonam Mahaamaham festival