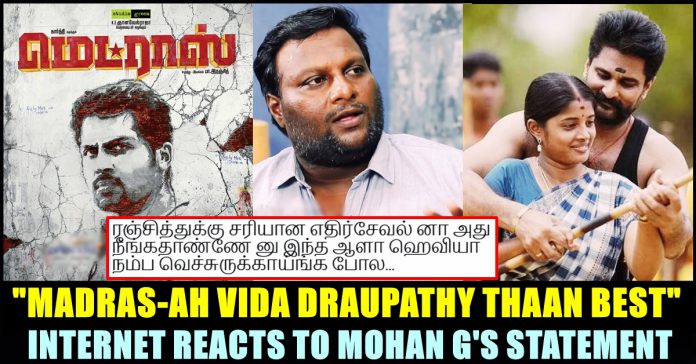 Director Mohan G, ahead of the release of his film “Ruthra thandavan”, has been appearing in youtube channels as a part of the promotion. In a recent interaction with a youtube channel host, Mohan G claimed that his second film “Draupathi” is better than Pa. Ranjith’s “Madras” as far as content and collection is concerned. He said that he can provide proof and added that the distributors of Kollywood film industry would tell the same. However, majority number of twitter users disagreed with him saying that the comparison is baseless and many trolled him as well.

During one of the recent interactions, when the host asked Mohan G how he sees the opportunities achieved by Pa. Ranjith and himself in two films, Mohan G accused media for not celebrating his second film “Draupathy” as they celebrated Pa. Ranjith’s second film “Madras”. The filmmaker went on to compare both the films and said that “Draupathi” is the best film as far as content and collections are concerned.

“The way media celebrated the victory of “Madras” and “Draupathy” is completely different. “Madras” is a better film as far as direction, making are concerned. But “Draupathy” is the best film when it comes to content and collection” Mohan G says in the interview. “I can prove it. You can ask the distributors. Though my film collected that much, Media didn’t celebrate my film” says Mohan G in the interaction.

“Media doesn’t want me to talk about the content I am talking about. As they celebrated “Madras”, a Superstar actor like Rajinikanth comes into the projects and things happens. But they provided low marks to “Draupathy” and branded it as an “unwanted” film to the society. They also project it as a film that talks about caste pride. Heroes who are doing well in the industry, wouldn’t volunteer to do films with me as there would be a fear in them about their image and market. Actors like Gautham menon, Radha ravi and Thambi Ramaiyah are accepting my projects by crossing such boundaries” Mohan says in the interview.

As soon as the interview got published, trolls started emerging against the filmmaker fir comparing his film “Draupathy” with “Madras”. Check out some of the reactions that surfaced in Internet below :