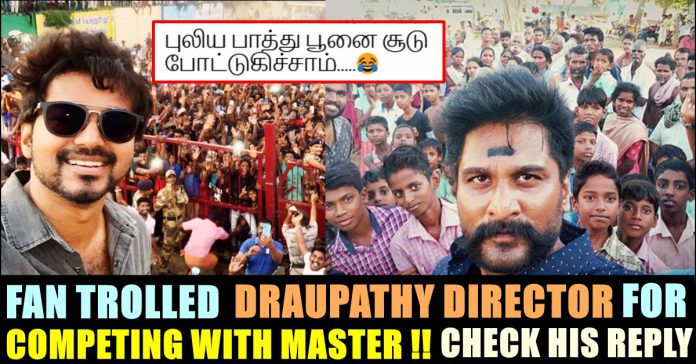 Vijay selfie with his fans in the shooting spot of his upcoming film is the most trended hashtag yesterday. Director Mohan who is awaiting for the release of his next film has uploaded a similar selfie of actor Richard who is playing the lead in his “Draupathy”.

Meanwhile director of Draupathi, in a way of answering to the selfie of actor Vijay, posted the selfie picture of Richard to promote his upcoming film “Draupathy”, trailer of which created a big time controversy. The trailer of his “Draupathi” released recently only to create ruckus by dividing the people of social media into two sections as many people started supporting it and equal number of people are expressing their thoughts against it.

Check out the selfie posted by Mohan here :

It is notable that Mohan is an ardent fan of actor Ajith and Richard is brother-in-law of actor Ajith. As soon as Mohan uploaded this post, many users of Twitter started trolling the filmmaker for uploading the selfie followed by Vijay’s selfie. One of an user said that this post could be avoided as Vijay just uploaded a selfie with fans to which Mohan replied by saying that both are promotions.

Another user trolled Mohan saying that he is just a cat which pretends to be a tiger. Check o=how Mohan replied to him :

Draupathi is expected to hit the screens soon. What do you think on this comparison made by Mohan ?? Comment your views below !!