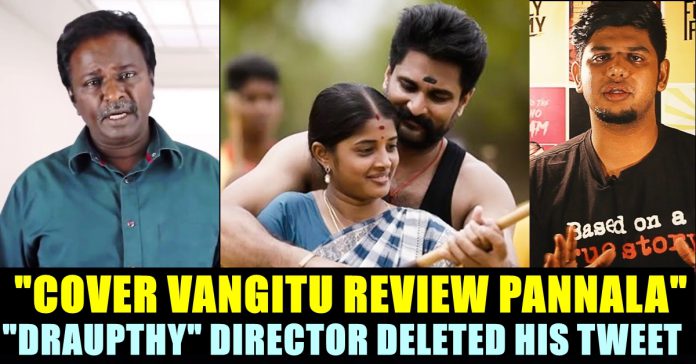 Mohan G, the director of controversial film “Drauptahy” has accused few movie reviewers for not reviewing his movie and deleted the tweet later. However the screenshot of his tweet is going viral now among the netizens with various kind of reactions. The filmmaker has accused them for receiving a “cover” and not reviewing the movie during the preview show.

The filmmaker tweeted it as a reply when one of his follower questioned why popular movie journalists of “Valaipechu” youtube channel didn’t review the film. Mohan, in his reply said that not only Valaipechu team but many of those reviewers who wished him for the film in person failed to review it. “Not only them, many reviewers who wished me in person didn’t review it. They watched film and received “cover” as well. It will be fine if they return it” he said in his tweet.

In one of his interaction with Newsglitz youtube channel, has said some of the prominent reviewers of Tamil film industry didn’t review the film. “In fact, they lauded the film after watching it in the press show. We spent money like every others do and arranged a press show. Nowadays reviews started emerging with a pre-decision. We are arranging a press show for them to review it. Through their review, there are possibilities for us to get promotion in any way. Blue Satta Maaran, Abhishek, Valaipechu didn’t review my film and I couldn’t find the reason behind it” Mohan said in his interview.

“I don’t know how to find the reason. They might think that reviewing my movie will elevate my market. As an Independent filmmaker, I regretted for screening a press show” he added. Ananda Vikatan, a popular weekly magazine gave just 29 marks for the film out of 100 and said that “Draupathy” didn’t do justice.

Reviewing the film, Vikatan accused the film for sprinkling poisonous seed among the audience. “Exposing the fake marriages and the corruption in Register office is something to be welcomed. But accusing a particular community for all such crimes is regressive and a poisonous preach.” the review of Vikatan said.

Director Mohan G even posted a tweet saying that Blue Sattai Maaran didn’t review the film as he is busy making his own film, in one of his tweet.

What do you think on these accusations made by the director of “Draupathy” ?? Comment your views below !!

Vijay Sethupathi who earlier reacted to a fake news which said that he is trying to make people convert to christianity, came up with...

People are glued to their terrace with their cell phones in the morning of Thursday to capture the solar eclipse. Several parts of the...