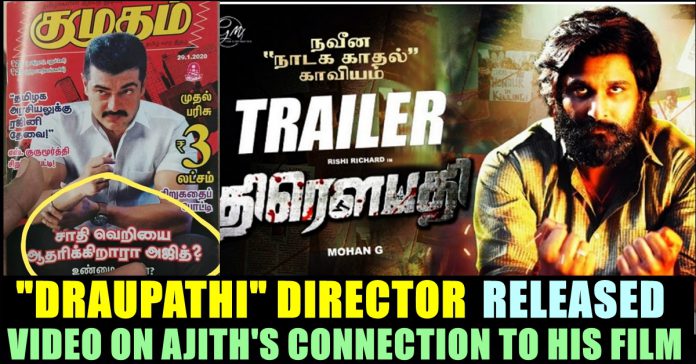 What started as a least expected low budget upcoming film, has became one of most expected film as it created debate among the supporters and anti supporters of caste in Tamilnadu. The film “Draupathi” directed by Mohan G who made “Pazhaya Vannara Pettai” as his debut film. The trailer of his “Draupathi” released released recently only to create ruckus. The film indeed divided the people of social media into two sections as many people started supporting it and equal number of people are expressing their thoughts against it.

The portrayal of caste in Tamil films has been raised in large number in recent times. While films like Pariyerum Perumal, Kabali from Pa. Ranjith emerged to expose the caste oppression that still takes place in the society, mostly from rural part of the Tamil speaking state, films which celebrates a particular caste are also continues to be made. “Draupathy” happens to be the latest one to join the list.

The trailer which was released recently suggests us about the plot of the film. It vaguely tells that youngsters from “lower” caste are luring the women of upper caste groups in order to lead a wealthy life. The film has Rishi Richard and Sheela in the lead roles.

Now a leading Tamil magazine “Kumudham” has published their magazine with a cover picture of actor Ajith. “Do Ajith Supports Caste obsession ?” it was written alongside the actor in the cover photo. The article was about the connection of director Mohan with Ajith Kumar. It is notable that Mohan is an ardent fan of Ajith who is very much interactive with his fellow fans of the actor. Ajith’s brother in law Richard has played the lead role in “Draupathi”.

Now in a way of replying to them, Mohan has uploaded a video in his twitter account which shows his daughter kissing the magazine. The director said that the video is the loveable gift for those who linked Thala Ajith with his “Draupathi” “Thala is always a respectable person” he wrote in his tweet.

The film is expected to hit the screens soon. Comment your views on this video shared by the filmmaker !!

Ever since coming out of Bigg Boss house, Anitha refused to appear in the interviews being organised by private youtube channels and is interacting...

“I Will Watch Super Deluxe In Tamil Rockers & Spend The Money To A Beggar” Said This Man !! Check How This Theatre Replied...

As the release date of director Thiagarajan Kumararaja's Super Deluxe is nearing, there is a sense of excitement in the air. The film boasts...