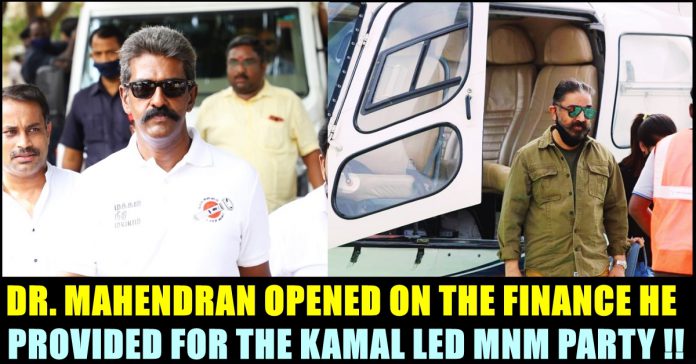 After resigning from the party, Dr. Mahednran, former vice president of Makkal Needhi Maiam party has been appearing in media portals to talk about why he removed himself from the Kamal Haasan led party. He said that the attitude of Kamal Haasan towards the growth of the party has not been changed even after facing huge loss in the Tamil nadu assembly election. Now, while interacting with News 18, Mahendran opened on the finance he provided to the party.

On the evening of Thursday, Prominent members of Kamal Haasan’s Makkal Needhi Maiam announced that they are resigning from the party. The decision came from the politicians after the party failed to win any of the seats in the Tamil nadu assembly election. Vice President Mahendran, in his press release said that there is no change in the approach of Kamal Haasan in taking the party forward even after the huge loss.

Now, while interacting with News 18, Mahendran said that there was no democracy in the party. He said that Kamal blamed the party members for the immense loss and wanted every administrators to get resigned after losing. “He was not ready to receive suggestions and said that he doesn’t want to embarrass us by pointing out the mistakes of every individual. It looked like he was asking us to leave the party after the loss” said Mahendran who was prepared to leave the party before the meeting.

Mahendran strongly believed that Kamal Haasan is being directed in the wrong path by the administrators of “Sankhya solutions”. He also expressed his disagreement over the party sharing 100 seats with its alliances for the assembly elections. “Losing doesn’t matter. Even biggest parties of the state have faced huge losses. But the way we are losing and our attitude towards the growth after the loss matters” Mahendran said and went on to open about the finance he provided for the party.

“I don’t have any regret on providing money to the party. I have been telling this to many people since last year. If I invest money in building a temple by expecting the God to give something to me in return, I will end up receiving nothing. I assumed this party as a temple and invested money along with many. I am not even interested in mentioning the number. It is not important. I am happily leaving the party without feeling bad about the money I invested” Mahendran said.

Watch the full interview of him below :

Previous articleJulie Replied To A User Who Spewed Hatred At Her After Seeing BB Jodigal Promo !!
Next articleInternet Can’t Keep Calm After Knowing About The Full Lockdown !! Read Details

“Don’t Wear This, You Will Look Short” – People Advised !! Here’s How DD Handled Them

Anchor Dhivya Dharshini who is popularly known as DD among the television audience, on Monday, came up with a post in her official Instagram...

Public people who went to fill their vehicles in Aalapakkam got shocked once 6 masked men started to chase them with dangerous weapon. A person...