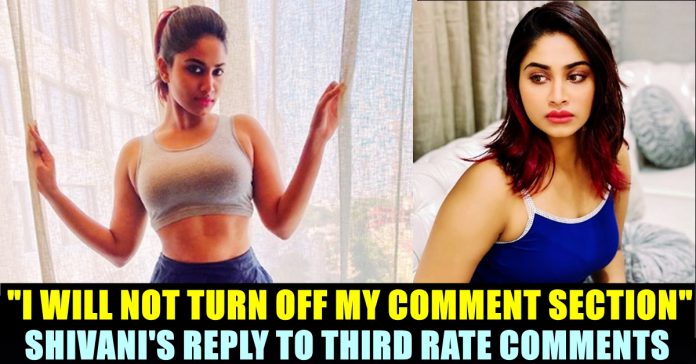 “Rettai Roja” fame Shivani Narayanan who is highly believed to enter the Bigg Boss 4 show as a contestant, has released a statement slamming those who are uploading abusive comments for her Instagram posts. Not only the Instagram users, Shivani also slammed the youtube channels which are making troll contents based on the videos and posts she is uploading in her Instagram account.

Shivani Narayanan, the young Internet sensation who is making youngsters go gaga through her ultra glamorous photoshoots, is currently enjoying 21 lakh plus followers in Instagram. She who is very much believed to enter the Bigg Boss reality game show, is rumoured to be spending her quarantine days in a hotel room allotted by the Bigg Boss management.

Take any Instagram post of the youngster, one can witness a bunch of men and women storming her comment section with offensive, vulgar comments. In one of her recent posts, the 19 year old slammed the people who are posting such comments on her posts. Shivani said that the post is a message to those who are making third rated comments on her posts and for the those who are earning money by making cheap contents on others. “And the very pity part about that is to hear a female voice over for such cheap trolls , don’t you feel ashamed ?” she asked.

The aspiring actress further said that she has the right to choose her outfits. To those who comment bad about her brought up, Shivani said ““my parents have brought me up so well in the way I have the liberty to make choices of my own”. She made sure that the pictures she post and the dance videos she is making are being uploaded out her own interest.

Shivani also said that she never wanted to impress anyone through her posts, adding that there is no need for that. “body shaming me in comparison with my age will never hurt me and don’t try , “coz you gonna fail”..finally it’s none of your business” her angry post said.

Finally, the Vijay TV star said that she is not going to turn her comments off as there are thousand of good hearts to comment. “I will pray almighty for you mind sick creeps to grow up …” her post read.

This post is To all those creeps who are posting 3rd rate comments on my comment section as well to some troll pages on YouTube who earn money and live out of making cheap contents on others .. And the very pity part about that is to hear a female voice over for such cheap trolls , don’t you feel ashamed ? By the way I have the right to decide my outfits.. What to wear and what not to .. And to those who comment bad about my brought up and family — “my parents have brought me up so well in the way I have the liberty to make choices of my own”.. The pics I post , the way I dance or I sing it’s all purely out of my interest not in the intention to impress anyone and there’s no need for me to do such and body shaming me in comparison my with age will never hurt me and don’t try , “coz you gonna fail” .. finally it’s none of your business … And I will not turn off my comment section for the sake of you creeps while there are thousands of good hearts to comment .. I will pray almighty for you mind sick creeps to grow up …

Comment your views on this bold statement of Shivani !!

Previous articleIleana’s Powerful Statement About Her Looks !!
Next articleParthiban Makes A Strong Statement On Vijay’s Gesture At SPB’s Funeral !!

Music composer James Vasanthan who has been letting his followers know about his thoughts about the ongoing Bigg Boss show, lately came up with...

Tamil nadu based Indian spinner Ravichandran Ashwin reacted to the news reports that were doing rounds for the past two days, reporting about Ashwin's...