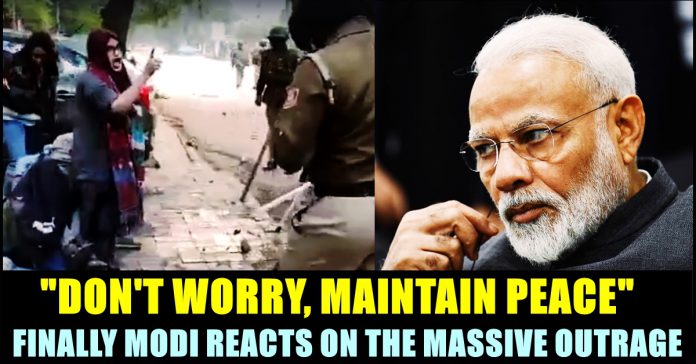 The Citizenship (Amendment) Bill 2019, that seeks to give Indian nationality to non-Muslim refugees from Pakistan, Bangladesh and Afghanistan passed the lower House test yesterday. The Bill seeks to amend the definition of illegal immigrant for Hindu, Sikh, Parsi, Buddhist and Christian immigrants from Pakistan, Afghanistan and Bangladesh, who have lived in India without documentation. They will be granted fast-track Indian citizenship in six years. So far, 12 years of residence has been the standard.

Many celebrities and politicians are expressing their disappointment towards the Citizenship Amendment bill. To an extent it even created massive uproar across the country as students started protesting against it.

Students of Jamia Milia university in Delhi involved in protest against the Citizenship Amendment act passed by central government. The trouble started Sunday evening after a protest march by the Jamia students ended in a pitched battle with the police, vandalism and torching of vehicles. The police, which used batons and teargas to contain the violence, later barged into the university and detained around 100 students. All the detained students were released around 3:30 am.

Now in a way of reacting to it, Prime Minister Modi posted a series to tweets supporting the decision made by the government. He said that the citizens of India no need to worry as the CAA (Citizenship Amendment Act) is only for those who have faced years of persecution outside and have no other place to go except India. He even requested the citizens to stay calm and spread peace.

Check out his tweets here :

Violent protests on the Citizenship Amendment Act are unfortunate and deeply distressing.

Debate, discussion and dissent are essential parts of democracy but, never has damage to public property and disturbance of normal life been a part of our ethos.

The Citizenship Amendment Act, 2019 was passed by both Houses of Parliament with overwhelming support. Large number of political parties and MPs supported its passage. This Act illustrates India’s centuries old culture of acceptance, harmony, compassion and brotherhood.

I want to unequivocally assure my fellow Indians that CAA does not affect any citizen of India of any religion. No Indian has anything to worry regarding this Act. This Act is only for those who have faced years of persecution outside and have no other place to go except India.

The need of the hour is for all of us to work together for the development of India and the empowerment of every Indian, especially the poor, downtrodden and marginalised.

We cannot allow vested interest groups to divide us and create disturbance.

This is the time to maintain peace, unity and brotherhood. It is my appeal to everyone to stay away from any sort of rumour mongering and falsehoods.

The Citizenship (Amendment) Act passed last week makes it easier for non-Muslims from Pakistan, Afghanistan and Bangladesh to become Indian citizens. Opposition parties have demanded the scrapping of the law which, they say, discriminates against Muslims and is against secular principles of the constitution.

Comment your views on this tweets posted by PM Modi !!

Previous articleAkshay Kumar “Liked” A Post Of Students Getting Attacked ?? Check His Clarification !!
Next article“S.A Chandrasekar Must Get Arrested Under POCSO”- Popular Personality !!

Harbhajan Singh has replied to the tweets of the Kollywood celebrities in Tamil. The exhilarated fans have been reacting and sharing their comments on...