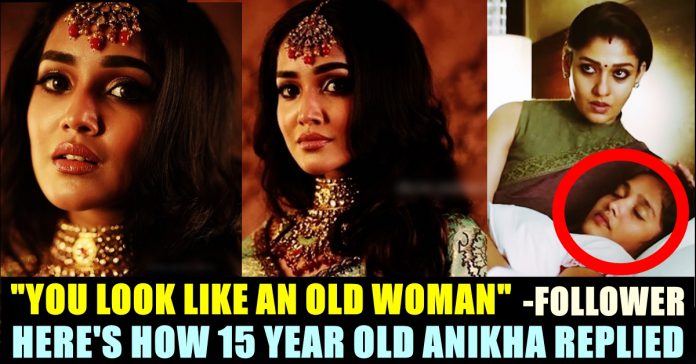 Days after replying to a troll in Instagram, upcoming actress Anikha Surendran replied to another Instagram user who advised her not to wear too much of makeup. To one of her recent posts, in which Anikha was seen wearing a traditional attire with lot of jewels, the follower who claimed herself as a performer, advised the 15 year old actress not to wear too much makeup.

The long comment of the user whose Instagram handle name is “Dance Queen Deeksha”, asked Anikha not to wear lot of make up which makes her look like an old lady. She who said that Anikha is a blessed child with natural beauty, added that people like to see her as the girl who appeared in “Viswasam” movie.

Dheeksha who claimed her as a performing artist, suggested Anikha that an excess amount of make up will work for the artists who perform far from audience, not for the ones who pose for close ups. “I found a lot of people teasing you like aunty or granny and all . If ur natural 👍 then it’s ok . “ Dheeksha worried.

“I’ve spent a lot of time texting this so I hope you see my message . If you do please leave a like . I feel that it’s just a suggestion from the public. Anyways keep rocking …….. Waiting for your next movie” she further wrote.

Replying to this long advice from a fellow performer, Anikha Surendran said that she is a person who tries everything. She who informed Dheeksha that it is a concept photoshoot, said that it is the way she is supposed to look. “It’s not like I’m using makeup to cover up my insecurities. I WOULD NEVER DO THAT. And natural makeup is something that I love doing all the time and is part of my routine and you can see that on ig too. I’ve taken a lot of time typing this out too so I hope you see this learn something” Anikha replied.

Anikha Surendran, 15 year old child artist who is known among Tamil audience for her appearance in films like “Viswasam”, “Ennai Arinthaal”, ” Naanum Rowdy Thaan” is currently busy posting pictures of herself in social media platforms from the photoshoots she is conducting. With 9 lakh 74 thousand followers, Anikha has posted 295 posts in her official Instagram account. She who is expected to play lead in near future, is already being compared with the looks of “Lady Superstar” Nayanthara. Read : “Behave According To Your Age”- Follower’s Harsh Comment Made Anikha To Reply !!

With her unique attires and International level makeovers, Anikha is competing with the top heroines of Indian film industry. She is constantly receiving 2 Lakh plus likes for every of her post through which is on par with some of the top actresses. Comment your views on this reply of Anikha !!

Jwala Gutta, Indian badminton player who represented India in International matches exposed the abusive texts she received for posting a self motivational quote in...