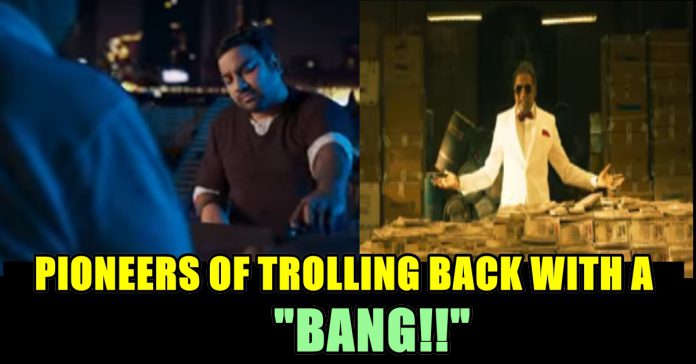 The resemblance is unmistakable. Shiva looks exactly like Deputy Chief Minister OPS did, when he meditated at the Jayalalithaa memorial just before setting off an unprecedented rebellion in the ruling AIADMK.

The second look poster has got people all over social media ROFLing, with the tweet by makers Y Not Studios getting over 500 retweets and over 1,500 likes within the first four hours. The film reportedly stars stars Aishwarya Menon, Disha Pandey, Sathish, Santhana Bharathi, Manobala, R Sundarrajan, Nizhalgal Ravi and Chethan. The team’s first look poster set Twitter aflutter when it announced that Tamizh Padam 2.0 will release on May 25, 2018, and that there will be a ‘Tamil Rockers release’ the very next day. Poking fun at the heartburn the online pirates cause the industry by releasing all latest movies within days of their theatrical release, the first look poster called Tamil Rockers the film’s “official piracy partner”.

Now the teaser of the movie released which is resembling almost all the top actors and all the big house produced movies of Kollywood cinema.

Comedy actor Soori who is about to make his debut as protagonist through Vetri Maaran's "Viduthalai", replied to those who got offended by his...

Despite of his on and off batting performance for Kolkata Knight riders, Dinesh Karthick is winning the hearts of Tamil speaking IPL followers through...

“Draupathy Is A Bad Dream In My Career” – Actress Sheela !! WATCH

In her recent interaction with a news channel, actress Sheela Rajkumar who is known for acting in acclaimed films such as "Mandela", “Kumbalangi Nights”,...

When Did Samantha Change Her Gender ?? Director Atlee Got Brutally Trolled For This Reason !!

Singapenne single released recently and was celebrated all over the Internet not only by fans but also by the celebrities. Bigil starring Vijay and...