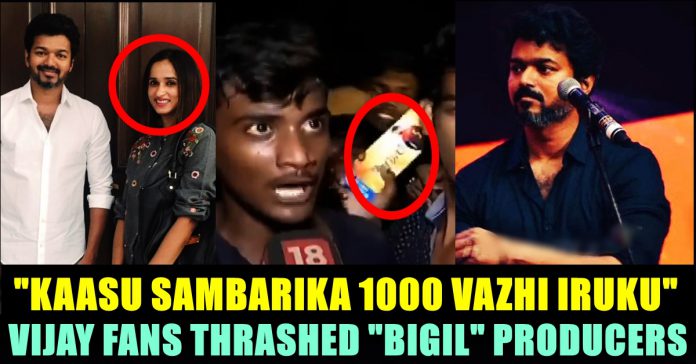 Bigil audio launch took place at Sri Sairam engineering college and it became a trending topic in social media since morning of yesterday. Fans from all over state wished to take part in the audio launch to witness the speech of actor Vijay.

The actor who has been giving motivational speech to his followers in audio launches from Theri movie’s audio launch, raised the expectation of his fans for Bigil audio launch. In the film the actor is going to be appeared in dual role and the movie has been directed by Atlee.

In this audio launch, Vijay addressed many social issues including Subashree’s death which was caused by AIADMK’s political hoarding. He even made a statement which took dig at the current ruling party. He asked his fans to use their social media trending power in issues like Subashree’s death. “Online fan wars are fine as long as they don’t cross a line and continue to be fun. If they turn vicious and hurt people, it must be avoided. Social media has plenty of power which much be used for good. Start hashtags on pressing issues such as at the time of Subashree’s death can help bring greater awareness about an important issue,” he said.

Meanwhile, fans of the actor who took part in the audio launch seemed to be disappointed due to the fact of getting beaten by policemen. To control the crowd, police conducted “Lathi-charge” on the fans. When one of a fan raised question against the policemen, one of them reportedly asked the fans to question the production house for providing 20,000 tickets to a hall which has capacity of having only 10,000 people.

WATCH THE VIDEO BELOW :

It is notable that Vijay asked police not to beat his fans during first day first show of his movie release. “You tear my pictures and banners. But don’t beat my fans” he reportedly said in yesterday’s audio launch.

Check out some of the reactions for this incident in twitter :

Previous articleA Man Who Weighs 134 KG Wants To Become Like Madhavan !! Check How The Actor Reacted !!
Next articlePower Cut In Dhoni’s House For No Reason ?? SHOCKING STATEMENT From His Wife !!

The Central Bureau of Investigation (CBI), in an unprecedented development, conducted raids inside its own headquarters and arrested Deputy Superintendent of Police (DSP) Devinder...

Unknown miscreants damaged the super bike of a famous motovlogger who is fondly called as Pyro's girl by he followers. She who enjoys 5...