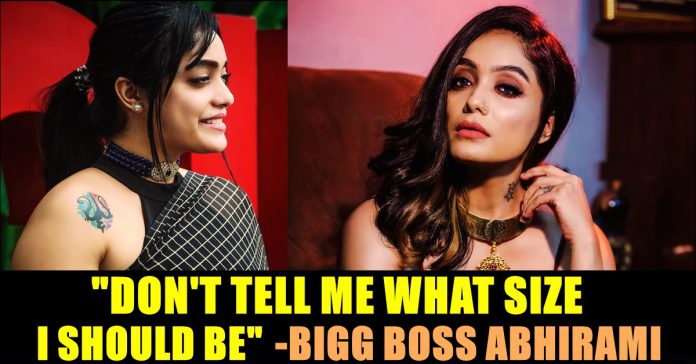 Abhirami venkatachalam who rose to fame through her stint in Bigg Boss show, has been expressing her frustration over the body/slut shaming comments she has been facing in social media platforms since very long time. On Friday, she came up with a story replying to such comments by uploading a picture of herself. Days ago, while captioning for one of her posts, Abhirami asked people not to tell her what size she should be or what clothes she should wear.

Abhirami Venkatachalam is one of the many Bigg Boss contestants who is pretty much active in the social media platforms. The model got debuted in Tamil film industry through Ajith Kumar’s court room drama “Nerkonda Parvai” which is a remake of Bollywood blockbuster “Pink”. In the film, she played the role of one of the friends of Shraddha Srinath. Having nearly 9 lakh followers in Instagram, Abhirami had uploaded 884 posts in the photo posting social media site so far.

On Thursday, Abhirami came up with a n Instagram story writing “#Game On, #Body Shame City, #F**OFF, My Body My Rules” and added a picture of herself.

On the work front, Abhirami Venkatachalam who got eliminated from the Bigg Boss house on 57th day, is currently busy participating in the “Murattu Singles” reality show as one of the judges. She is expected to appear in films such as Nerunji, Gajen etc.