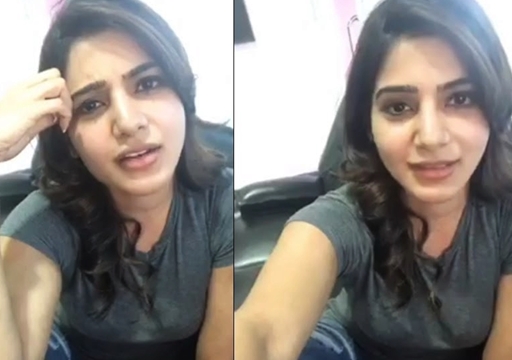 Tamil nadu based South Indian Actress Samantha, on Friday, came up with a tweet in her official Twitter handle, sending a warning to those who are mistaking her kindness for weakness, silence for ignorance calmness for acceptance. The actress went on to state that her kindness can have an expiry date through her tweet. As the actress didn’t mention about the reason behind her tweet, speculations and assumptions are being made by her fans and followers.

Samantha is currently waiting for the release of her upcoming film “Kathu Vaakula Rendu Kaadhal” in which she played the role of a modern girl named “Khathija”. Single “Dippam Dippam” released recently and the actress was very excited to share the same to her followers. She even thanked director Vignesh Shivan for the lovely lyrics he wrote for her.

On Friday, Samantha, in her offical twitter handle, came up with a tweet writing “Don’t ever mistake MY SILENCE for ignorance, MY CALMNESS for acceptance, My KINDNESS for weakness” without adding any context. It is notable that the quote belongs to world famous spiritual leader Dalai Lama.

Don’t ever mistake
MY SILENCE
for ignorance,
MY CALMNESS
for acceptance,
My
KINDNESS
for weakness.

Samantha went on to add another tweet saying “Kindness can have an expiry date ☺️
#JustSaying” in her tweet.

In the meantime, trailer of “kaadhalum Kadanthu Pogum” in which Samantha shared screen space with Nayanthara and Vijay Sethupatthi got released in youtube. The film is expected to hit screens on 28th of April.

The tweet caused speculations from a set of her followers with many making fun of the tweet. True fans of the actress stretched their supportive hands to the actress as well.

You are more stronger than you think queeen 👑

Be patient @Samanthaprabhu2
Don’t react for this third rated people’s
Ignore them and move on.. ❤️😌
Be strong with lots and lots of love and happiness 💕
With love @RagulRa56322916 #SamanthaRuthPrabhu #Beast

She never give up💪🔥

More power to you 🙏🔥❤️ pic.twitter.com/in6XNsTB1L

On the work front, apart from “Kaathu Vaakula Rendu Kaadhal”, Samanth is also expected to be seen in “Shaakuntalam”, a mythological drama film, written and directed by Gunasekhar and produced by Neelima Guna and Dil Raju. She recently made her digital debut with the second season of the popular Hindi series The Family Man. The actress who is pretty much active in social media platforms, enjoys 9.6 million and 23 million followers in Twitter and Instagram respectively and has been engaging her followers with her pictures from photoshoots, movie updates and gym workout pictures.

Suriya's "Soorarai Pottru" released in Amazon Prime only to make the fans of Tamil cinema go gaga over it. It became the first Tamil...

Netizens Trolled Vanathi Srinivasan After Noticing This Detail In The Opening Ceremony Of Her MLA Office !!