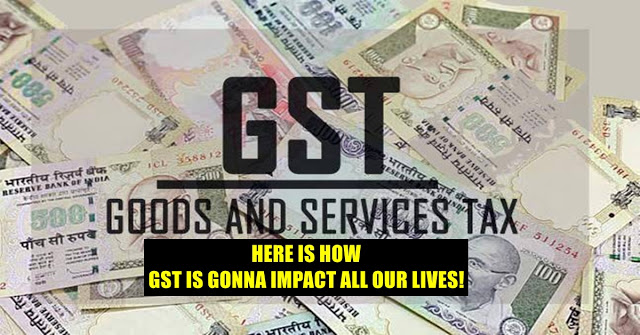 The Lok Sabha, in May 2016, passed a Constitutional amendment bill to roll out the Goods and Services Tax (GST), a reform that would finish the fiscal barrier between states and economically unite India. A year later, on August 3, 2016, after a 7 hour debate, the Rajya Sabha too passed the bill, heralding a new economic epoch for India. After the LPG reform in 1991, this might be the next big thing that will change things in India for the better.

While everyone is talking about the GST, do we know what it entails and how it will affect us? Here’s what the GST bill actually is, and in what way it will positively/negatively impact you:

GST is meant to be a uniform tax, that will get rid of all kinds of indirect taxes that states earlier levied on customers, like octroi, VAT, excise duty, etc. Currently, states imposed different taxes with varying rates on the same product, because of which your kurta in Big Bazaar in Chennai is way more expensive than the same kurta you bought in Madurai.
A fixed rate of 18% will be levied on all goods and services across India from now on, and manufactured goods are expected to become cheaper.

Here are the sectors that will be impacted by the GST:

Your mobile phone calls will now become expensive because of GST. However, handset prices will come down or get equalized across states

Earlier, because each state levied their own VAT, excise duty, and entry duty, there was no warehouse rationalisation. Now, companies can save on logistics and distribution costs. Key beneficiaries of the GST bill are companies like Hindustan Lever, Colgate, etc.

Again, the cascading problem of varying tax structure across states has been eliminated, making it easier for e-commerce companies to do business

Eating out might cost dearer to you now, as earlier there was only 15% tax on services. However, according to an HSBC Global Research report, lowering of tax rates for manufactured consumer goods and rise in tax rate for services are likely to offset each other resulting in a limited net impact on inflation based on the consumer price index

Now, your ticket rate might get lowered because each state used to impose a different entertainment tax earlier. Film producers and creative studios will also benefit out of it, as earlier service tax was paid by them on much of their cost. Now that has been eliminated, and they can also charge input credit on creative services

GST will reduce time at check posts, ease logistics. With productivity increase, it may happen that automobile companies wouldn’t see a point in expanding mid-term. But on road commercial vehicles cost will decrease

Finance Minister Arun Jaitley, while taking about the implementation of this bill, said that India is not a ‘confederation of states’, it is a union of states. But a ‘union of states’ can’t exist without a union being there. For the first time, there has been a unanimous majority on a bill that can impact India’s unity and its people for the better. Here’s a big shout out and cheer to India’s democracy today. The GST has its shares of flaws, but in the long run, it reduces fiscal barriers, and unnecessary taxes, decreasing corruption and also equalising rate of services and goods.
source – BI