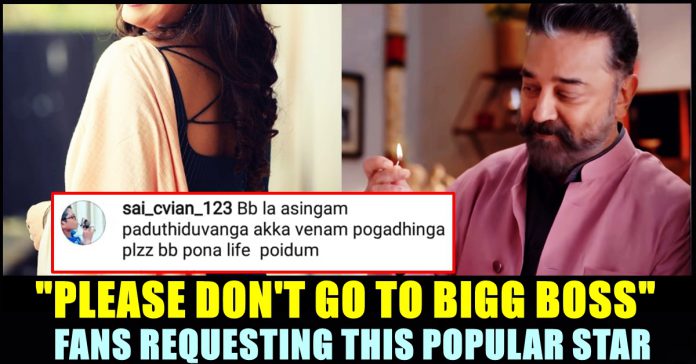 It has been officially announced that season 5 of Tamil Bigg Boss is going to be launched from 3rd of October and fans of the show are eagerly waiting to witness the 15 celebrity contestants which will be revealed only on the inaugural. However, speculations are doing rounds in Internet constantly with many reacting to how the show would be if their favourite celebrity enter the house. One of the celebrities whose participation has been almost confirmed is Priyanka of Vijay Television. She came up with a funny video in her official Instagram account recently and many of her followers could be seen requesting her not to enter the house in the comment section of her post.

Participation of popular anchor Priyanka who is known for hosting Super singer, Start music and several other shows, has been confirmed as she failed to make her presence in the shows that she regularly hosts. Ma.Ka.Pa Anand and Shivaangi replaced her as anchors in Start music and Super Singer season 8 respectively. It is believed that she could be spending her quarantine period now and many fans are pretty much excited to see her in the 100 days reality game show. However, a number of fans didn’t want her to go into the house and expressing their wish through their comments in her recent post.

On Friday, she uploaded a reel in her Instagram timeline, performing a funny task. Watch the video below :

On seeing the reel video, many concluded that the TV star is spending her quarantine time before entering the Bigg Boss house and commented that she is doing such reels to kill time. A number of fans could be seen requesting her not to participate in the show as well. “You will lose you stardom” a follower commented whereas another said that she will get humiliated there and wanted her not to enter the house.

Previous articleFormer ADMK Minister Jayakumar Harshly Criticized Finance Minister PTR !!
Next article“I Killed Her Because She Was Talking With Another Man” – Ramachandran In POlice Investigation

Television actress Sreenithi who recently grabbed headlines due to her review about "Valimai" in a theatre premises and her Instagram videos about depression, once...

As we all know, Google Pay is used to send money to or receive it from others through our smart phone. Once the transaction...