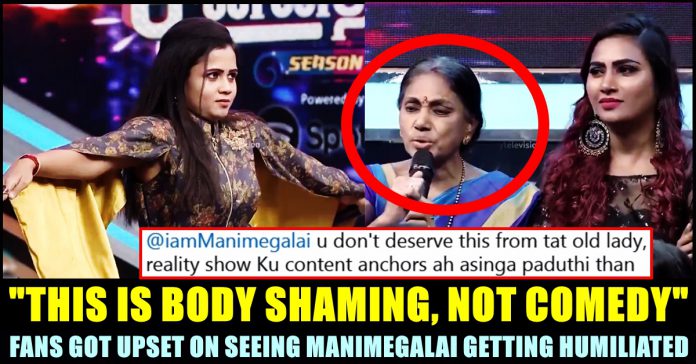 A number twitter users expressed their dejection over a promo that got released in the official twitter handle of Vijay Television on Tuesday. Popular Television anchor Manimegalai who is known for hosting shows at Sun music, is currently working at Vijay Television and has been hosting reality shows of the channel. While hosting an episode of Mr and Mrs Chinna Thirai, the young anchor got trolled by a relative of one of the participants.

In the pretext of making fun, the elderly woman could be seen criticizing Mani megalai’s voice and her appearance. Online users who happened to watch the glimpse of the show through Vijay television’s twitter handle, expressed their disagreement over the woman demeaning Mani Megalai’s looks and voice.

In the promo video, the woman asks Manimegalai why she is hosting the show and tries to make humour by saying that Manimegalai doesn’t deserve to host the show. “Don’t you have sense ?? Why you cane to host the show just because they invited you ?” she questions the seasoned anchor. “What kind of attire is this ?” the woman further asks and compares Manimegalai with a scarecrow. “your voice sounds like a rat squeaking while trying to get out of a door alley” she further says.

Receiving the comments in a light manner, Manimegalai countered the comments by defending herself. However, the comments didn’t go well among the users of the micro blogging social media site as they started to criticize the channel for making content out demeaning an individual. “This is not a comedy. Body shaming. Vijay tv should stop this kind of insult to their anchors” a twitter user commented whereas another one said “Absolutely ridiculous !!!! Manimegalai, don’t encourage or entertain such things !!!”

I know it's scripted and all, but was this really supposed to be funny or something?? Is that what the director and media masons thought?? All I see is an annoying boomer lady bullying someone for simply doing their job.🙄 Calling her Eli gili and all is too much. Poor Mani. https://t.co/SrX1eGmQ8k

This is not a comedy. Body shaming. Vijay tv should stop this kind of insult to their anchors

How on earth this is classified as a comedy!! This is a clear abuse and insult towards @iamManimegalai

Okay, not nice.. This maami doesn't know to do subtle comedy.

Comment your views on the promo and the comments it is receiving from the viewers !!

Previous articleYashika Anand Announced About Her Next Film After The Tragic Accident !! Check Reactions
Next articleTwitter User Shared His Experience On Being Cheated By A Transgender!! Check Reactions!!

On Monday, Kings XI Punjab skipper Ravichandran Ashwin inflicted the first ever 'Mankad' in the history of the Indian Premier League as he ran...