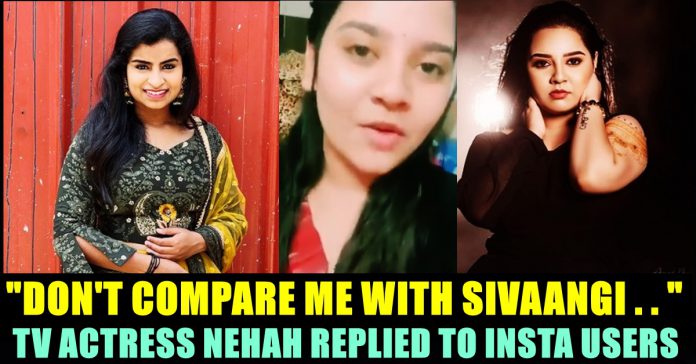 After seeing the messages sent by a number of Instagram users on herself being compared with Sivaangi for wearing similar attire, TV actress Neha who is known for acting in the serials of Vijay and Sun Television, came up with a video asking people not to compare her with Sivaangi and admitted that she herself a big fan of the singer. Through messages, many people expressed their disappointment over Neha being compared with Sivaangi which made made the former to release a video asking people not to do it.

Sivaangi became the darling of masses through her stint in the cookery show which demands a seasoned cook to collaborate with a comedian to cook a dish to impress the judges. After the success of Cooku with Comali’s season 1, the makers have inaugurated the second season with a list of contestants which included dance master Baba Baskar, actress Shakeela, Models Dharsha Gupta, Pavithra Lakshmi, Ashwin, comedians Bala, Pugazh, Sivaangi, Mani meghalai etc. Sivaangi won hearts through the second season as well.

The show became a huge hit among the Television and Internet audience. Not only the ladies, even youngsters including college, school students started celebrating the show as it mainly concentrates on providing humour unlike other cookery shows. Recently, actress Neha of “Bakkiyalakshmi” fame shared a story of one of her followers in her official Instagram account which showed herself and Sivaangi wearing similar clothes.

The Instagam handle “Nehah Uyir” said “Aww… two cuties” by adding the pictures of them. Check out the screen shot of the post below :

As soon as sharing the story, Nehah seems to have received a number of Insta users sending messages expressing their dislike over the comparison. “Don’t compare Sivaangi with Neha, Neha is also best but don’t compare it irritates Sivaangi fans like me” read a message of a user which was shared by Heha.

Replying to her, Nehah said that she doesn’t know how to react to such texts and asked such people to grow up and spread love.

Here’s the story she shared :

Followed by this, she shared a series of videos asking people not to compare her with Sivaangi and said that she herself is a big admirer of the singer. “You people would have seen the previous story in which they collaged the pictures of myself and Sivaangi. It was totally out of love and they didn’t compare.” Nehah said in her story.

“On seeing that story, many people are saying that they doesn’t like myself and Sivaangi being compared. I am requesting the same as well. Please don’t compare us. She is amazing and is in next level. I myself a big fan of her. So please don’t compare us. Even after I uploaded that story, many kept sending messages that we two couldn’t be compared. No tension. Just chill. There is no need of comparison. That’s what I am saying too. Let’s spread love. Love you all” she added.

Watch the video of her story below :

We all would have watched that one scene in a movie or in a Television serial where the bride would marry a complete stranger...

"Cooku with Comali" fame Manimegalai, a couple of days ago, uploaded a post in her Instagram handle reporting about a theft. She expressed her...

TV actress Sameera who is known for appearing in Vijay TV serials such as "Pagal Nilavu", "Rekka Katti Parakkudhu Manasu" and others reacted to...