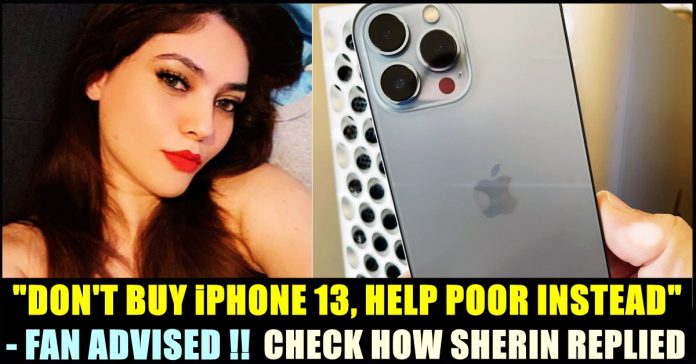 Actress Sherin who debuted through Selvaraghavan’s “Thulluvatho Ilamai”, recently made her come back through the third season of Bigg Boss show, conducted a chat session with her followers. The actress is enjoying 1.5 million followers for her Instagram account after uploading 631 posts. Among the many who questioned, one of her followers advised the actress not to buy the recently launched iphone 13 and asked her to help the poor people instead. The actress who subtly refused to do the same, gave a valid answer and explained him how she would like to help the poor.

Sherin became a darling of Tamil television watching audience after participating in the third season of reality game show Bigg Boss which was hosted by Ulaga nayagan Kamal Haasan. Since the end of the 100 days show, the actress is keeping her followers busy by posting the pictures and videos of herself in her official Instagram account.

After “Thulluvatho Ilamai” with Dhanush, Sherin went on to act in films like “Whistle”, “Urchagam”, “Bheema” etc. After several attempts, she managed to grab a spot in the heart of Tamil audience only through Bigg Boss show. Her outspoken attitude and morning dance moves made youngsters to fall in love with her. She was the first ever contestant in Bigg Boss Tamil history who was never nominated for eviction within the first 10 weeks of the show and she emerged victorious as the 3rd Runner up of the season.

On Friday, the actress conducted a chat session with her followers and answered to many of their questions. One of them asked the actress whether she would watch the upcoming season of the Bigg Boss show whereas another asked her about her upcoming projects. Sherin also cleared air on her relationship status. Check out the answers provided by her below :

Meanwhile, a follower of the actress requested her not to by the recently launched iPhone 13 and advised her to help the poor instead. Replying to him Sherin said “Here’s the catch ! I need the latest in technology so I can shoot high quality content for my social media pages, which helps me earn, pay me employees and do charity. It’s not vanity, it’s a necessity” in her reply.

Comment your views on the reply made by the actress to her follower !!

Fan Criticized “JIGARTHANDA” Soundar Raj For Acting In “BIGIL” !! Check How He Replied !!

Thalapathy Vijay is upbeat about his upcoming film Bigil, which is all set to release on Diwali 2019. The film marks the third collaboration...