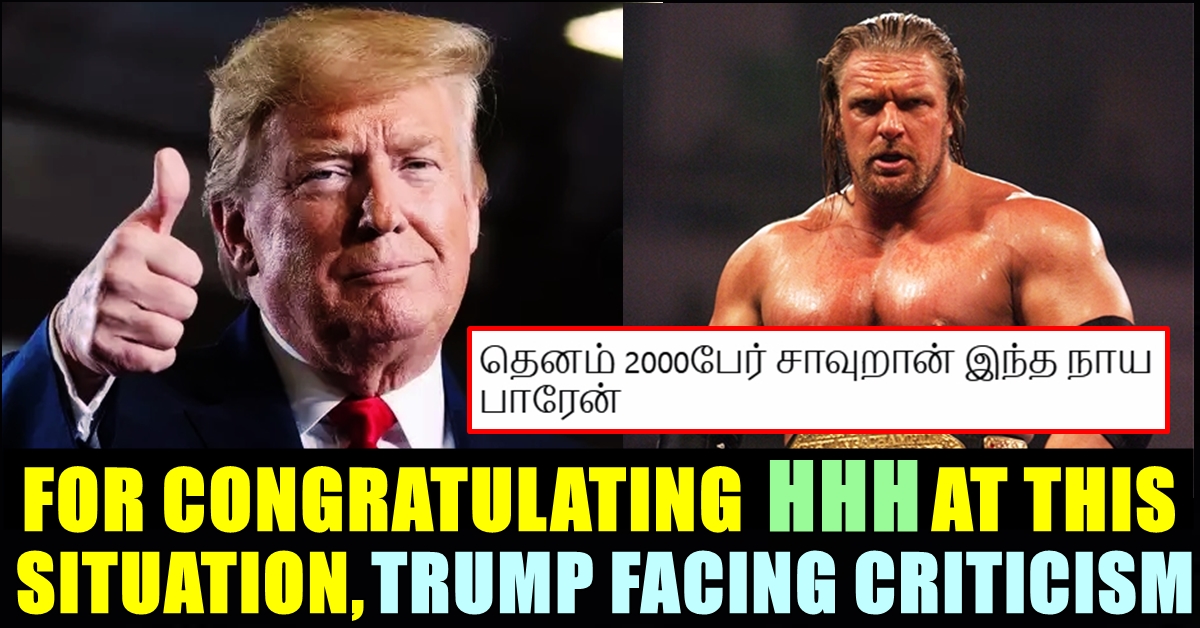 As nearly 52,000 Americans died so far due to the deadly coronavirus, Donald Trump’s recent tweet on WWE Superstar Triple H has created huge outrage among netizens. Triple H is celebrating his 25 years anniversary in World Wrestling Entertainment today. Wishes from all the directions of social media platform is pouring for him for his achievement.

Triple H who is fondly called as “The Game” by the fans of him, is considered as one of the most influential and well known wrestlers across the world. Entire wrestling entertainment world is celebrating the achievement of the legendary icon and bizarrely he was praised by American president Donald Trump.

Vince McMahon, Triple H’s father-in-law posted a picture of “The Game” with his daughter and wrote “We didn’t know it a quarter-century ago, but he would go on to change “The Game” forever. Happy 25th #WWE Anniversary to my son-in-law, “ as a caption of his post.

We didn’t know it a quarter-century ago, but he would go on to change “The Game” forever. Happy 25th #WWE Anniversary to my son-in-law, @TripleH! pic.twitter.com/QnacTDfZ2y

Donald Trump who saw this tweet, replied to it by lauding Triple H for his 25 years anniversary. “Triple H is a total winner!” his tweet read.

It is notable that the main staged rivalry heading into WrestleMania 23 was between WWE Chairman Vince McMahon and Donald Trump. On the January 8 edition of Raw, Trump faced off against his real-life rival, Rosie O’Donnell. Trump won the contest, although local wrestlers portrayed Trump and O’Donnell.

However, this tweet from the president of united states, irked many people as the country desperately requires solution to combat the deadly coronavirus which is killing thousands of people in daily basis. Check out some of their reactions below :

52 thousand dead Americans and this is what you tweet about. ghoul

10 year old me would be hype af to know that one day we would have a president that liked pro wrestling. 26 year old me hates it here. https://t.co/kCPk7gST7W

really glad the PRESIDENT OF THE UNITED STATES OF AMERICA DURING A WORLDWIDE PANDEMIC has the time to tweet about wrestling https://t.co/OXsFnBEp3P

With just 1.5% of the population tested, the President has yet to issue a statement noting the deaths of 52,000+ Americans to this virus, nor expressed condolences to their loved ones.

But he did take time this morning to excitedly acknowledge HHH's WWE anniversary. https://t.co/q4tmqsDK6Y

Suriya Films To Face Ban In Theatres ?? Here’s What His Fans Did !!
Fans Made Malavika Mohanan To Delete Her Tweet Twice ??
Advertisement