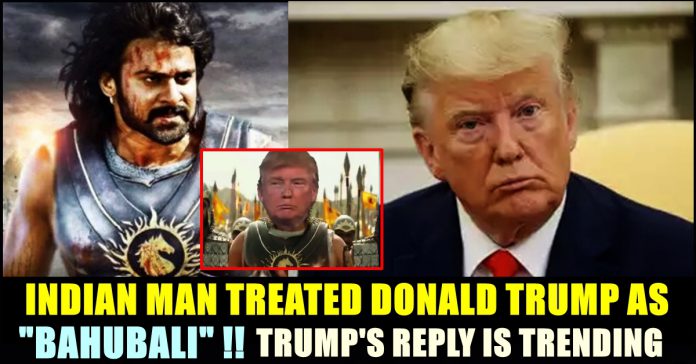 Donald Trump is visiting India for the first time and thousands of Indian people are lined up in the streets of Ahmedabad city to greet him, in Prime Minister Narendra Modi’s home state Gujarat. Trump is expected to inaugurate the world’s largest cricket stadium in the presence of more than one lakh people.

PM Narendra Modi will be hosting US President Trump and his delegation and stage a massive roadshow through Ahmedabad. The two leaders are expected to gather for the ‘Namaste Trump’ cultural extravaganza. Trump and his team will later leave for Agra to see the Taj Mahal. Later Trump will be flying to Agra in the evening where CM Yogi Adityanath will be welcoming the US delegation.

This historical visit of the America’s president made people in social media to react in several ways. Hashtags such as “Trump in India, Trump Modi Meet, Namastey Trump, Trump India visit” are trending in the micro blogging social media site. In a way of expressing his excitement, one of a twitter user morphed Trump as Indian super hero “Bahubali” and shared the video in his twitter account.

Sharing the video, the user wrote “To celebrate Trump’s visit to India I wanted to make a video to show how in my warped mind it will go…… USA and India united!” With the song “Jiyo Re Baahubali” playing in the background, the video also features First Lady Melania Trump, with her face superimposed on that of actor Ramya Krishnan’s who plays the role of Sivagami, the foster mother of the protagonist played by actor Prabhas.

The most unexpected fact about the video that surfaced in Twitter is that is grabbed the attention of the US president himself. On seeing the video, Donald Trump wrote, “Look so forward to being with my great friends in INDIA!”

Look so forward to being with my great friends in INDIA! https://t.co/1jdk3AW6fG

This reply from him received more than One and half likes and shared by forty six thousand twitter users. Followed by this, Trump has been sharing about his activities regarding his India visit through his official twitter video.

Departing for India with Melania! pic.twitter.com/sZhb3E1AoB

It is an honour that he will be with us tomorrow, starting with the historic programme in Ahmedabad! https://t.co/fAVx9OUu1j

Trump even posted a tweet in Hindi saying that he is eager to visit Bharat. “We are on our way, will meet you soon in few hours” he wrote in his tweet.

Comment your views on these posts shared by the US president !!

Previous articleParthiban Replied To A Cheeky Comment Of His Follower !!
Next article“Mafia” Director Replied To Harsh Criticisms !!