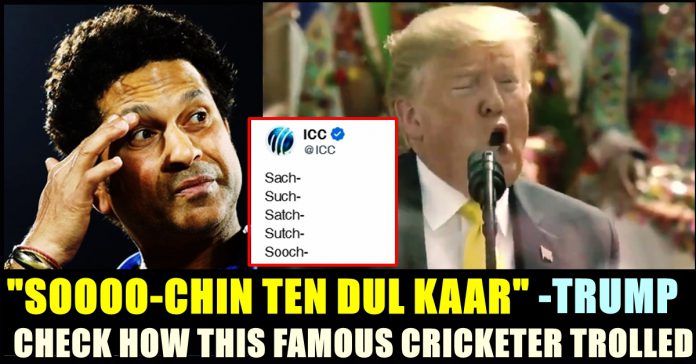 Kevin Pietersen, former England and IPL player has took a dig at American president for pronouncing cricketing legend Sachin Tendulkar’s name in a wrong way. Donald Trump visited India for the first time and thousands of Indian people were lined up in the streets of Ahmedabad city to greet him, in Prime Minister Narendra Modi’s home state Gujarat. Trump is expected to inaugurate the world’s largest cricket stadium in the presence of more than one lakh people.

PM Narendra Modi hosted US President Trump and his delegation and stage a massive roadshow through Ahmedabad. The two leaders gathered for the ‘Namaste Trump’ cultural extravaganza. Trump and his team left Agra to see the Taj Mahal as well. Later Trump flew to Agra in the evening where CM Yogi Adityanath welcomed the US delegation.

This historical visit of the America’s president made people in social media to react in several ways. Hashtags such as “Trump in India, Trump Modi Meet, Namastey Trump, Trump India visit” are trending in the micro blogging social media site. Now, the American president has made the social media users to go crazy with his speech where he mispronounced the names of Indian icons.

During his speech, Donald Trump who appreciated Bollywood, moved on to mention the legendary names of Indian cricketers in front of thousands of people who made their presence to the opening of the world’s largest cricket stadium. Though the crowd greeted at the speech of Trump, users of social media started making fun of it.

“This is the country where your people cheer on the biggest cricketers, from Sachin Tendulkar to Virat Kohli, the greatest in the world,” said Trump at the event.

As soon as Trump mentioned the names of the two biggest cricketers to come out from India, the entire Motera Stadium erupted in joy and a loud cheer, even bringing a smile to the lips of Prime Minister Narendra Modi.

One of the first person to react to the blender of Donald Trump is former England player Kevin Pietersen. He posted a tweet mentioning the British Television host Piers Morgan. He wrote “FFS, @piersmorgan, pls ask your mate to do some research in pronouncing legends names?!” in his official twitter account.

FFS, @piersmorgan, pls ask your mate to do some research in pronouncing legends names?! https://t.co/eUGuCNReaM

The twitter account of Iceland cricket which is known for its savage tweets, couldn’t restrict themselves from trolling the US President.

Fair play to Trump. Soo Chin Ten Dool Ka and Vee Raat Ko Li are the most popular Chinese dishes in India. It was nice of him to learn the exact Cantonese. pic.twitter.com/5NFanNXfkp

Why hate someone for the pronunciation of names they’ve never heard before when there are so, so, so many better reasons to hate them?

Comment your views on the way Trump pronounced the names of Indian legends.

Previous articleChinmayi Reacts To The Lip Lock Controversy !!
Next articleSana Khaan Accused Her Boyfriend For Impregnating A Small Girl !!

On Sunday, Tamil nadu based Oscar winning high profile musician A.R Rahman uploaded a picture in his official twitter account in which he was...