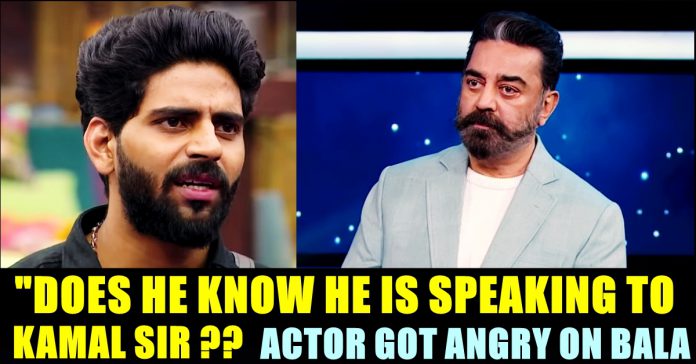 The weekend episode of Bigg Boss season 4 streamed on Vijay Television with Kamal Haasan appearing in it as a host. With less than 10 days to go for the grand finale, contestants of the Bigg Boss house are pumped up and are having heated arguments with each other. Kamal Haasan, while analysing the activities of the housemates, roasted Balaji Murugadoss for his violence behaviour throughout the week.

It all started when Aari nominated Balaji Murugadoss as one of the worst performers of the week for not following the orders of Bigg Boss. He also said that the flaws he made while being a captain of the house last week caused difficulties in cleaning the house this week. Balaji intervened and asked Aari to talk about this week alone. When Aari asked Balaji to wait till he finishes, Balaji continued confronting Aari.

The duo, after being selected as the worst performers of the week, continued their argument inside the room. For calling him as a “lazy”, Balaji removed his mic and threw it to show his frustration towards Aari. Even after Aari asked sorry to Balaji, the latter kept disrespecting the former by calling him names.

On Friday episode, Balaji asked Aari why he nominated him by saying that his love with Shivani blinds him. While answering it, Aari said that audience who are watching the show knows about it. This made Balaji angry that he threw pillows and shouted “Leave Shivani’s topic alone”. Kamal Haasan, while addressing the issues, reminded Balaji about his statement about the winners of the previous seasons.

Balaji, during an epiosde, said that winners of previous seasons did nothing inside the Bigg Boss house other than eating nuts. Kamal asked Balaji not to underestimate audience and said “no one is taller than audience”. Replying to him, Balaji initially said that he couldn’t understand what Kamal said and added that he never said anything like that. Kamal asked Aajeedh to remind him what he said.

Balaji kept denying the statements of Kamal Haasan by saying that he forgot his own deeds. On seeing this attitude of the body builder, dance choreographer Sathish who is known for appearing in films such as “Vaaranam Aayiram”, “Achcham Enbathu Madamayada” uploaded a tweet slamming him.

Sathish said that he didn’t like the way Bala answering Kamal Haasan. He questioned whether he knows that he talking to Kamal. “I seriously don’t like the way bala answering kamal sir. Does bala really know that he is speaking to kamal sir ? Bala brother u seriously don’t deserves this show . Vijay tv pls allow kamal sir to give him left right centre and pls don’t telecast.” read the tweet of Sathish.

I seriously don’t like the way bala answering kamal sir. Does bala really know that he is speaking to kamal sir ? Bala brother u seriously don’t deserves this show . Vijay tv pls allow kamal sir to give him left right centre and pls don’t telecast.

Check out Sathish’s other tweets regarding yesterday’s episode :

Rio n gabby seriously when u guys don’t know how to handle situation pls get out of the place . Rio pacifying bala seriously omg adeengapa. Bala took the topic when aari speaks everyone says don’t speak and pointing aari why ?

Previous articleIndian Players Thrashed By A Set Of People For Consuming “Beef” !!
Next articleDinesh Karthik Reacted To This Strange Comparison !!

Actor Shanthanu, son of veteran director, actor Bhagyaraj, has participated in an interaction with VJ Abhishek for a show called as "Spotlight" which streamed...