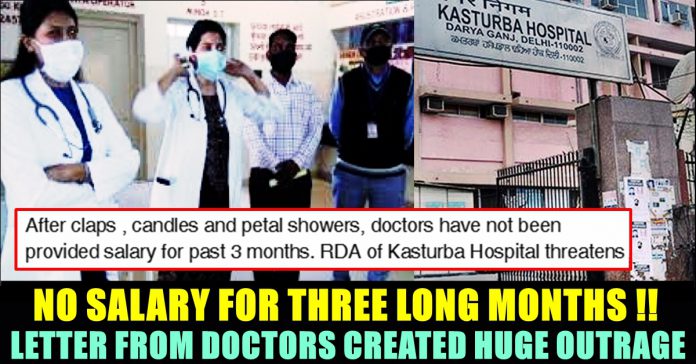 Amid the Corona crisis which is threatening the world right now, the frontline workers of Kasturba Gandhi hospital suffering without salaries for past three months which made them to threaten a mass resignation by 16th of June. Apart from struggling to COVID 19, the healthcare workers at the hospital under the North Delhi Municipal corporation have not been paid their salaries since March month, according to reports.

“This is to inform that the resident doctors have not been paid their salaries for the last three months. No pay, No work. We are afraid that we are not be paid by June 16, we will have to move for mass resignation”, said a letter sent to the additional medical superintendent of the Hospital.

The association further added that Doctors who are putting their life at risk, couldn’t able to pay their rents, travelling expenses or buy essential commodities due to the non-payment of salaries since March. “We hope the concerned authorities will take immediate action and take out a notice on priority”, the letter added.

Here’s the letter that has been produced on behalf of the frontline workers :

WHAT IS THIS?
NO SALARY FROM LAST 3 MONTHS AT KASTURBA HOSPITAL, DARYA GANJ, NEW DELHI, IN THE TIME OF CORONA PANDEMIC, WHEN THE RESIDENTS ARE WORKING TIRELESSLY FOR THE NATION. pic.twitter.com/fFlXICYedE

Jai Prakash, the north corporation’s standing committee chairperson, said the civic body was persuading doctors not to take any such step and ensured it was making all efforts to release their salaries at the earliest.

“We are facing a fund crunch and due to the lockdown, our income was further curtailed. So we could not pay our doctors. We have asked the Delhi government to release funds so that their salaries can be paid,” Prakash said.

Kasturba Gandhi is a 450-bedded, maternity and child specialty hospital near Jama Masjid. It is notable that, At least 10 staff members, including PG students, doctors and nurses, had tested positive for Covid-19 in the last two months.

This incident created huge outrage as many doctors across the country stretched their supportive hands to the doctors who are suffering. Public people started criticizing the government questioning their ability to save the country from this pandemic.

After claps , candles and petal showers, doctors have not been provided salary for past 3 months. RDA of Kasturba Hospital threatens with mass resignation. #IndiaFightsCorona pic.twitter.com/Tdgd3tUMgH

Shocked to hear that doctors at Kasturba Hospital, run by @NorthDmc have not received salaries for 3 months. Hospital CMO confirmed this to me on a call.

I fail to understand how we can win the COVID war by starving our warriors? Is this disaster management or creation??

The north corporation employs around 1,000 senior doctors, 500 resident doctors and 1,500 nursing officers, according to civic officials.