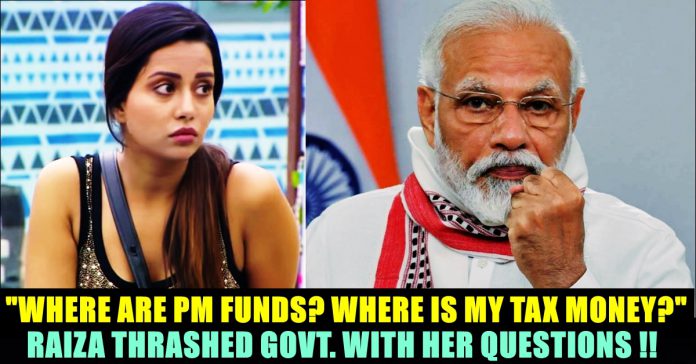 On seeing, the frontline workers of Kasturba Gandhi hospital suffering without salaries for past three months , actress and former Bigg Boss contestant Raiza questioned where her tax money are going. She asked several questions targeting the government including what they are doing with the PM funds. The actress asked these questions by posting the letter produced by the doctors of the hospital.

Apart from struggling to COVID 19, the healthcare workers at the hospital under the North Delhi Municipal corporation have not been paid their salaries since March month, according to reports. “Doctor haven’t paid for 3 months ? wait are you serious ?? So what’s the government doing with PM funds ??” the actress asked.

“This is to inform that the resident doctors have not been paid their salaries for the last three months. No pay, No work. We are afraid that we are not be paid by June 16, we will have to move for mass resignation”, said a letter sent to the additional medical superintendent of the Hospital.

The association further added that Doctors who are putting their life at risk, couldn’t able to pay their rents, travelling expenses or buy essential commodities due to the non-payment of salaries since March. “We hope the concerned authorities will take immediate action and take out a notice on priority”, the letter added.

Check out the letter here :

Uploading this letter in her Instagram story, Raiza is known for acting in “Pyar Prema Kadhal” and for participating in Kamal Haasan hosted Bigg Boss show, said that she has a simple question, and asked why she is paying taxes if there is no free medical care, no concessions on rent or other payments and doctors being not paid in a global pandemic.

Raiza went on to shoot a series of questions such as “How are tax payments being used ? Where is disaster management funds? How did the GST plans makes the difference ? Where is medical health benefits ? How am I being benefitted as a tax paying citizen of India ? Where all my tax payments going ? Who exactly is answerable right now ??” through her Instagram story.

Check out the screenshots of her stories here :

Jai Prakash, the north corporation’s standing committee chairperson, said the civic body was persuading doctors not to take any such step and ensured it was making all efforts to release their salaries at the earliest.

“We are facing a fund crunch and due to the lockdown, our income was further curtailed. So we could not pay our doctors. We have asked the Delhi government to release funds so that their salaries can be paid,” Prakash said. Kasturba Gandhi is a 450-bedded, maternity and child specialty hospital near Jama Masjid. It is notable that, At least 10 staff members, including PG students, doctors and nurses, had tested positive for Covid-19 in the last two months.

This incident created huge outrage as many doctors across the country stretched their supportive hands to the doctors who are suffering. Public people started criticizing the government questioning their ability to save the country from this pandemic. Comment your views on these questions asked by the actress !!

Previous articleDoctors Threatened “Mass Resignations” Over Unpaid Salaries !!
Next articleDoctor Died Of COVID 19 After Hospitals Refused To Admit Him !!

Chennai Super Kings have been in fine form throughout the IPL 2019 thus far and members of the Yellow Army are now taking up...

Vanitha Vijayakumar and Peter Paul appeared for the first time in an interview together. In the interview, both them narrated how they met and...