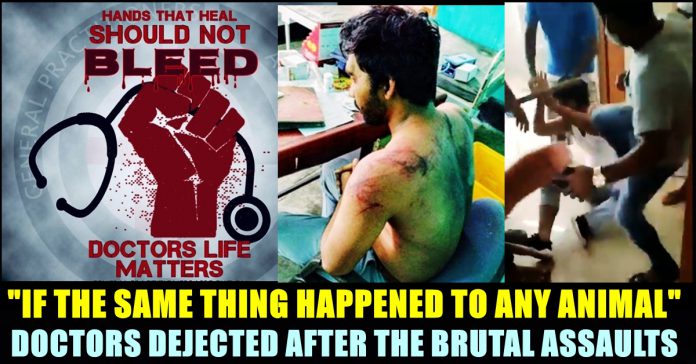 After Police officials arrested 24 people for attacking a junior doctor, after the death of a patient in Assam, four more people got arrested for assaulting a 50 year old doctor after a six year old boy died in the hospital he was working. The mob brutality created huge outrage among the public. Videos and pictures of the incident are also went viral in social media platforms with people raising voice against the assault made on Doctors.

It has been reported that a Covid-19 patient died at the centre and the relatives of the deceased patient brutally beaten the doctor identified as Dr Seuj Kumar Senapati. The video shows a number of people attacking and kicking the doctor for failing to save the deceased. “The relatives of the patient complained that the patient’s condition was serious. When I saw the patient, I found that he had already died. The relatives then immediately vandalised the furniture at the hospital and attacked me,” the doctor who reached Odali Model Hospital for his Covid-19 duty around 1:30 pm on Tuesday, said.

#Doctorassault
This is what we are paid …!
Rip humanity pic.twitter.com/iExYdCHFaq

Another doctor was attacked at Karnataka’s Chikkamagaluru district followed by the death of a 6 year old child. The doctor named Deepak was assaulted and is currently getting treatment at Shivamogga. Four people got arrested related to the attack and it has been reported that one of the four is a kin for the deceased whereas the rest are friends.

A doctor at a Covid care centre in Assam Dr Seuj Kumar Senapati, who was posted at Udali CCC in Hojai district of central Assam was attacked by mob who damaged the building and also ransacked instruments at the CCC besides brutally assaulting doctor
It's barbaric #savedoctors pic.twitter.com/qDuVIQhtHN

Resident doctors in Karnataka have written to Chief Minister BS Yediyurappa demanding the setting up of a legal cell to deal with such attacks. Meanwhile, users of social media, including celebrities and influential political personalities raised voice against the assault on Doctors. “Doctors have proved to be the spine in this pandemic. If you can’t praise them at least treat them as human . They shouldn’t be blamed for the lack of health infrastructure. Please stop assaulting” a social media user wrote whereas many others trended “Doctors lives matters” hashtag.

Let alone praising d #doctor fraternity for standing their ground & supporting Pt’s against all odds during d pandemic, people are hell bent on throwing verbal & physical volleys on them.
Really shameful. I strongly condemn the episodes of violence against doctors#Doctorassault

This is highly comdemnable. When you attack one Doctor, you break the spirits of countless others. #IndiaStandsWithDoctors https://t.co/OVfNKUSNgJ

We are so used to listening and seeing #Doctorassault that now we don't feel bad or guilty to stand and support #Doctors#Doctorslivematters pic.twitter.com/0JDFHc6OXy

No one outside medical fraternity will retweet/share this. You'll just see & choose to ignore cuz this doesn't interest you. If same thing happened to any animal, social media would've been flooded with condemnations. But afterall we're just docs right? Who cares? #Doctorassault https://t.co/JsWgaQKTio

Previous articleSanam Shetty Confronted Balaji Murugadoss For His Statement Against Behindwoods !!
Next articleWoman Hugged Daughter In Law After Testing Positive To Infect Her !!

This Physics Professor Found A Way To Keep “Idly” Fresh Even After 3 Or 4 Years !! WOW !!

Madhavan’s Request To Government Regarding Their “Recorded Phone Call Awareness” !!

For past few days, We have been hearing a computer voice creating awareness on how to prevent coronavirus from spreading on every first call...