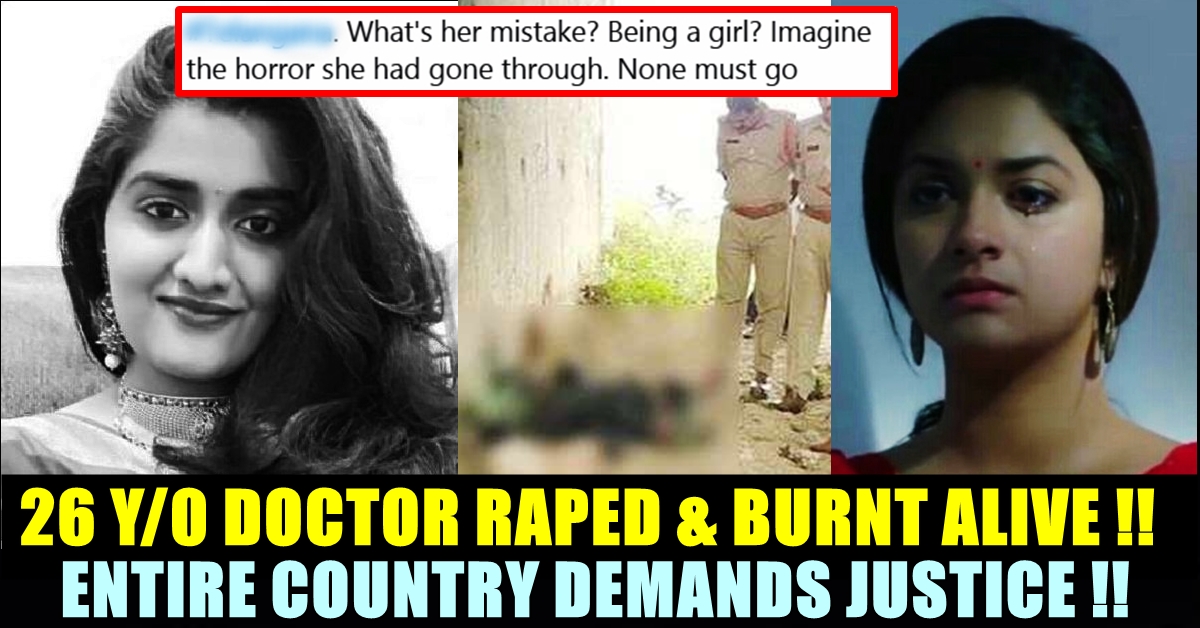 A twenty six year old doctor who went missing since wednesday found dead at Shadnagar. This news indeed shook the entire country as many citizens raised voice against the culprits. The veterinarian doctor suspected to have been raped and murdered by four people including a lorry driver and cleaner. The news of the incident happened in Hyderabad is spreading like wildfire across the country.

Family members of the victim allegedly informed that Priyanka called them the last night around 9:30 PM and said that her bike tyre was punctured and locals offered her help. They allegedly took her bike by saying that they will get it repaired and never returned. When Priyanka called her home and informed about it, her sister, Bhavya reddy suggested her to move into a more crowded area like toll booth to be safe. When the family contacted her again, her phone was switched off and the worried family went to place mentioned by Priyanka but couldn’t find her which made them to file a complaint in local police station immediately, around 11 in the night.

Dr. Priyanka Reddy's found brutally murdered & charred to death after she was stranded in Hyderabad outskirts

The next morning Priyanka’s body was charred beyond recognition in a devastated way and the family abled to identify Priyanka only through the Ganesh locket she was wearing. The body was sent to post mortem and the investigation is underway.

Police recovered Priyanka’s footwear, clothes and liquor bottles near Toll Plaza where she parked her vehicle. Police officers who are investigating the case by going through the CCTV footages, also suspect that the tyre of Priyanka’s two wheeler was punctured deliberately.

This news shook the entire country and many are demanding an immediate punishment for the killers.

Requesting All Women's To Not To Go Alone in
Night Or Drive Your Vehicle Alone..!! 🙏🏼🙏🏼
Please always Carry Peperspray With You
There are many Evil Around Us 😡😡
Women's Safety Is Very Important but in Our Country it's Totally Nothing 😭#RipPriyankaReddy RIP Sis 😥😓🙏🏼 pic.twitter.com/RQt5NVatVF

Rip sis😥
If anyone come across such situation please call to 112.
Go to nearby places where u can ensure safety.dont stay at highways.there are animals roaming with human skin
Rest in peace sister😞😞#rippriyankareddy pic.twitter.com/Dvzmh83tQh

Dr. Priyanka Reddy's cruel murder is yet another wake up call for all of us on women safety. Save women, not just through words. Ensure her freedom. We should bridge the gap between what is being spoken and what is actually practiced.#RIPPriyankaReddy #JusticeForPriyankaReddy

Recent update says that the police officers of Cyberabad arrested the culprits of the case. The reports suggests that they have arrested four and will produce them in front of media soon.