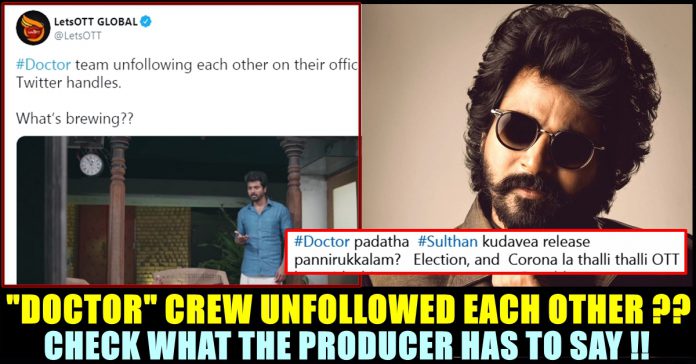 The official twitter account of KJR studios released a press note to clear the air on the controversy that is brewing since past few days regarding the release of the most awaited “Doctor” film. KJR’s statement said that he doesn’t want to talk about something celebratory like Doctor release amidst the second wave of COVID 19 virus which causes the demise of several people. He advised the fans to stay home and to take care of their families.

Directed by Nelson Dilipkumar, the film “Doctor” is touted to be a medical action thriller starring Sivakarthikeyan, Priyanka Mohan in the lead roles. The film was produced by Sivakarthikeyan and was KJR studios joined the project to co-produce and to distribute. Along with the lead actors, actor Vijay, Yogi Babu, Archana Chandhoke are playing supportive roles. Anirudh composed music for the film and the songs became chartbusters among the youngsters.

The music video of “Chellamma” song garnered 100 million views in youtube and the makers of it became extremely happy and has been sharing posters, tweets celebrating the immense feat. “Another century from our Rockstar @anirudhofficial” said Sivakarthikeyan in a tweet to express his happiness to which music director Aniruth said that the original video song which has Sivakarthikeyan and Priyanka Mohan dancing will hit double century.

The film’s post production work got completed and the makers were initially planning to release the film during the end of March. Later it was scheduled on 12th of May. However, Due to the second wave of COVID 19 virus, theatres across the state were forced to shut down and the film’s release got postponed by default. Meanwhile, a buzz surfaced in twitter saying that the crew members of “Doctor” un followed each other and it was believed that KJR was planning to release the film in a popular OTT platform.

#Doctor team unfollowing each other on their official Twitter handles.

In talks only… Not yet finalized

To clear the air on the brewing controversy, KJR came up with a press release writing “You have been asking us for updates about #Doctor everyday. As a Producer, I’m bearing all the financial & material
constraints caused by COVID-19 with a fully-ready film in hand. I’m doing everything within my power to get the film the right release!” the press note said.

Losing near and dear ones to the second wave on another hand…. At a time like this, where nothing is certain, I do not want to talk about something celebratory like #Doctor release. Please understand & oblige Stay home, take care of your family, respect the regulations. We as a country need to recover to rejoice a release.” the producer added.

Check out the press release below :

At least 45 people were killed and about 250,000 people were evacuated to relief camps in the last two days after severe cyclonic storm...

BJP Revealed The Identities Of Girls Who Raised Voice Against Them !! Got Thrashed

On Tuesday, the party BJP revealed the identities and other details of girl students who approached the Karnataka High court against the ban on...