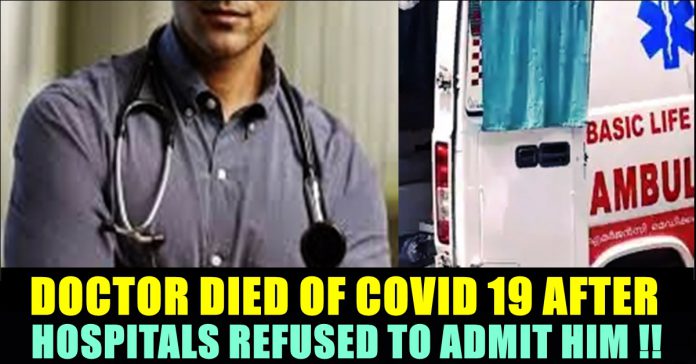 Doctor Died Of COVID 19 After Hospitals Refused To Admit Him !!

On Wednesday, a news on doctors threatening government of “mass resignation” at Kasturba hospital due to unpaid salaries since march month got surfaced. Now, a report on a Doctor dying due to unavailability of hospital left the public people in utter shock. The incident happened in Malad, Mumbai where the relatives of the Doctor found it impossible to get a government or private hospital for him at right time to save his life. The doctor died of COVID 19 on Sunday.

Dr. Shaukat Ali who is 45 year old was working as a front line worker in the Ambulance service at the Malad Railway station. When he got suffered with illness, his family struggled a lot to get him hospitalised, according to a report. The doctor was working in the 108 ambulance service for the past four years.

Zubair said that no one picked the call at 108 ambulance service, despite it is a call from a doctor who did service at Ambulance all these years. After waiting for a while for Ambulance, Zubair and Ali’s colleague Dr. Nigam rushed him to SK patil hospital in Malad east in an auto. The hospital authorities refused to admit Shaukat Ali stating that they are admitting only COVID 19 patients. After that, Zubair and Nigam took Ali to Desao Hospital where doctors were ready to admit him initially. However, they refused to get him admitted in their hospital stating that they have no bed. They even advised Zubair and Nigam to take Ali home stating that his health condition is fine.

When they took him to home, Ali;s condition got worsened it seems. Nigam and Zubair finally managed to admit Ali in a hospital named as Shatabdi hospital. “On Sunday, when his results came out stating that he got infected with COVID 19, doctors had already put him on a ventilator, where he passed away in the evening” Zubair said.

Zubair expressed his emotions on losing his uncle due to an irresponsible approach towards a patient from the authorities in the Desai Memorial hospital. “Had the doctors at Desai admitted him, My uncle would have been alive today” said Zubair who added that it is a great regret to not get a help from his own field despite of risking his life during this pandemic.

Ali was staying with his elder daughter who had recently appeared for HSC exams and she is currently preparing for NEET. His wife and two children are living in UP, suggests report.

The ongoing India vs Australia test tournament is coming out to be a pretty controversial one. Every day, something new happens on the field...