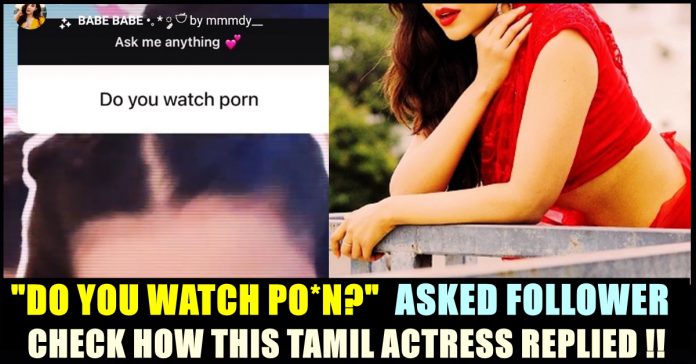 Actress Parvathi Nair, in the question and answer session which she conducted recently with her Instagram followers, replied to a fan who asked whether she watches “Po*n” films or not. She replied with a GIF video, shaking her head saying “no” with a mild laugh. The actress also replied to a number of other fans who asked questions like whether she went through any implants to stay sexy always, she would marry a guy who is younger her age etc.

Parvathi made her acting debut with the 2012 Malayalam film Poppins. She rose to fame among Tamil cinema’s mainstream audience after acting in Ajith kumar’s “Ennai Arinthaal” as one of the female leads. She paired opposite to Arun Vijay who played the role of an antagonist in the film. She did notable roles in some of the other Tamil films including “Uthama Villain”, “Maalai Nerathu Mayakkam”, “Koditta Idangalai Nirappuga” etc. The actress is pretty much active in social media platforms by interacting with her followers.

She is also busy uploading her posts from her photo shoots and often conducts questions and answer sessions. Check out some of her recent posts below :

On Thursday, she conducted a question and answer session with her Instagram followers. Most of them asked her about what kind of guy she would prefer to marry and some of them expressed their love towards her. Among the many who sent her their questions, a follower asked the actress whether she watches po*n films.

Replying to the Instagram user, Parvathi said “No” by uploading a GIF of herself. Check out her reply below :

“How are you always sexy ? Any plastic surgery or implant ? Size ??” another follower asked and Parvathy replied to him saying “None . . I am all natural and believe in being natural”

Parvathi also replied to a fan who asked her about wearing bikini.

Check out some of the other replies Parvathi provided to her followers :

Previous articleVanitha Vijayakumar Expressed Her Dejection Over Her Own Family Members !!
Next articleSivakarthikeyan’s Old Facebook Posts Which Were Posted Before His Acting Stint Are Going Viral !!

Trichy Based Sanjay Cleared His 23 Arrears Due To Government’s Decision !!

Due to the "all pass" announcement made by the Chief minister of Tamil nadu state, mixed reactions kept pouring in social media platforms for...