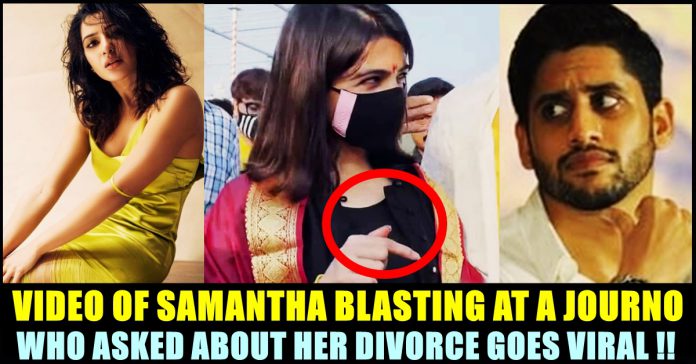 Video of actress Samantha slamming a journalist for violating her privacy while visiting Thirumala temple is going viral in social media platforms. She could be seen asking the journo whether he has a brain or not for asking an inappropriate question to her during her temple visit. The journalist reportedly asked about the divorce rumours that are surfacing about her marriage relationship of herself with Naga Chaithanya for past few days.

For past several weeks, a rumour on Samantha getting divorced from Telugu actor Naga Chaithanya is doing rounds in the social media platforms. It all started when the actress changed her social media handle names from “Samantha Akkineni” to “S”. Media started creating theories saying that the actress is demanding Rs. 250 crore as alimony. Now, it seems that the actress has replied to the reporters once and for all.

During the wee hours of Saturday, Samantha flew to Tirupathi and offered special prayers to Lord Venkateshwara at the VIP hours. While walking in the temple premises after praying, the actress got surrounded by local journalists. One of them reportedly asked her to comment on the ongoing rumours about her marriage life.

The “Super Deluxe” actress who got visibly frustrated, immediately blasted at him, asking “Guddikki Vachi . . Bhudhdhi Unthaa ??” which means “I am in a temple, do you have sense ?”. The video is going viral in the social media platforms with various kind reactions flooding from her fans and others.

So far, neither samantha nor Naga Chaithanya made comments on the divorce rumours. Recently, the actress wished her husband for his upcoming film “Love Story” in which he is going to share screen space with Naga saithanya. “WINNER!! All the very best to the team” she replied to Naga Chaithanya’s tweet by tagging actress Sai Pallavi.

She is also expected to be seen in “Shaakuntalam”, a mythological drama film, written and directed by Gunasekhar and produced by Neelima Guna and Dil Raju. She recently made her digital debut with the second season of the popular Hindi series The Family Man.