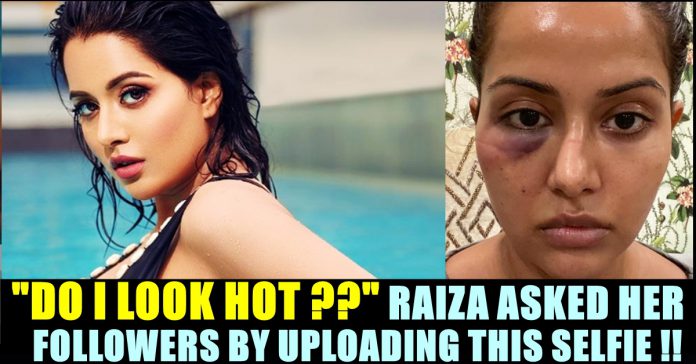 After accusing a dermatologist for scarring her face, Actress Raiza Wilson uploaded a series of her selfie pictures in her official Instagram account asking her followers whether she looks hot now. “Such a beauty” Raiza said and added heart emojis in one of her stories by showing the swell to the camera.

Days ago, Raiza came up with a shocking accusation against a Dermatologist and has uploaded a picture of herself in which her face could be seen affected by an alleged skin care procedure. The actress tagged an Instagram handle named Dr. Bhairavi Senthil and said that she caused her the trouble by forcing her to go through a procedure that she didn’t ask for.

Raiza wilson who debuted to Tamil film industry through “Pyar Prema Kaadhal”, is pretty much active in Instagram by uploading the pictures, videos from her photo shoots and film sets. She won praise for her matured performance in the romantic-drama Pyaar Prema Kaadhal, in which she acted along with her Bigg Boss housemate Harish Kalyan. She is one of the very few models who made it to big screen through Bigg Boss show.

In the first story, she posed for a selfie and said “Hi” to her followers.

In the second one, she uploaded a similar selfie and asked “Do I look hot?”

“Such a beauty” wrote the actress by uploading her third story.

On Saturday, Raiza uploaded a picture of herself suffering a deep swell in one of her eyes and said that she visited Dr. Bhairavi Senthil whose Instagram bio says that she is a Dermatologist, CEO, Medical director of Skin health foundation for a simple facial treatment.

“Visited @drbhairavisenthil. Yesterday for a simple facial treatment, she forced me to do a procedure which I did not need, and this is the result. **She refused to meet me or talk to me today. staff said she’s out of town” her story read.

Here’s the screen shot of the story Raiza uploaded :

Previous articleWoman Received Di*k Pics From Men After Seeking Help From Social Media Regarding COVID 19 Emergency !!
Next articleCell Murugan Shared An Unseen Video Of Vivekh At Midnight & Got Emotional !!

Actress Kissed By Fan In Public !! Check Her Reaction !!