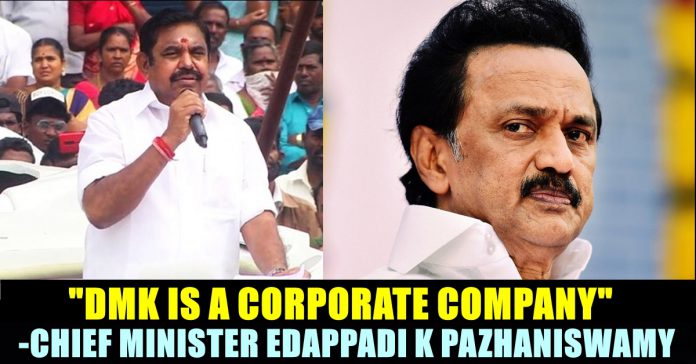 Chief minister Edappadi K Pazhaniswamy’s statement against DMK party’s “dynasty politics” and its leader MK Stalin grabbed headlines. While delivering his campaign speech in Kallakurichi, on “Mozhippor Thyagigal Thinam”, Chief minister Edappadi K Palaniswamy said that DMK party is a corporate company and MK Stalin is its chairman. During his campaign in Coimbatore, he also criticized him for deceiving voters in his “new avatar”, referring to a photograph of Stalin holding a silver vel that was presented to him by DMK workers during a gram sabha in Thiruvalluvar on Saturday.

“What are the services DMK provided to public so far ? It is not a political party but a corporate company. Stalin is the chairman of it. Dhayanithi Maaran, Kanimozhi are all part of it and would listen only to the words of Stalin. Be it their party or the government, no one excluding their family members could rule.” said Chief minister Edappadi K Pazhaniswamy and criticized.

Previous articleVijay Sethupathi’s Savage Replies To Reporters !! WATCH
Next article“You Are Not Even Worth” Balaji Murugadoss To Joe Michael !!

Manjima Mohan is an Indian actress, hails from palakkad, predominantly working in Malayalam films. She started her career as a child actress in the...

Kavin is one of the most talked about TV star for past two months due to his BIGG BOSS stint. the actor who was...