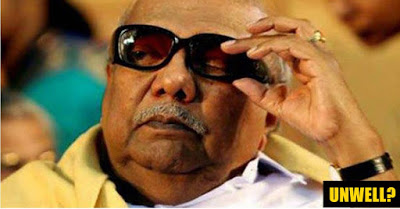 The Leader Of Dravida Munnetra Kazhagam (DMK) M.Karunanidhi was admitted to the Kauveri Hospitals, Chennai on the early hours of Dec-1-2016. According to information received, the former Chief Minister of the state of Tamil Nadu was admitted for “optimisation of nutrition and hydration.”
Previously the Chief was undergoing treatment for back pain back in his residence.

According to the press release issued by the hospital the Chief was stable and is undergoing treatment for optimization of nutrition and hydration and would be staying in the hospital premises for few more days.

His ADMK counterpart and current Chief Minister of the state J.Jayalalitha has also been admitted in the hospital for more than 2 months owing to lung infection.

Previously M.K Alagiri visited his brother and DMK Treasurer M.K Stalin on Karunanidhi’s residence. The reason for the visit is unknown.