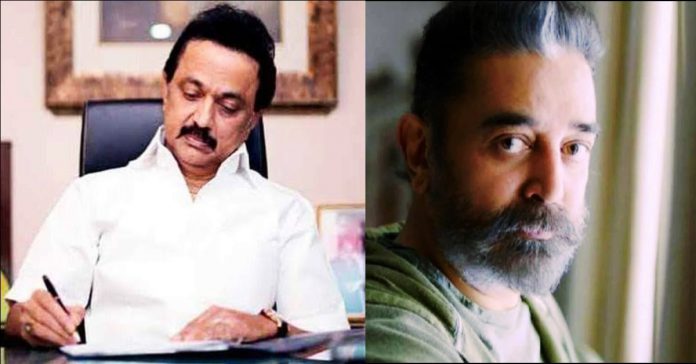 “There was a talk through DMK emissaries first. It is normal for everyone to talk with each other. I don’t take into account the talks through emissaries, but I would consider only the talks through their party leadership to me,” Kamal Haasan said to the reporters after celebrating his party’s fourth anniversary. It was reported that DMK is going to contest in 200 constituencies but the Coalition parties are upset, according to reports.

Questions asking whether DMK party is feared of votes getting scattered or whether it is panicked to know that a new third team is forming are surfacing from all the directions of Internet targeting the Stalin led party. Reports suggests that a huge confusion took place over the existing coalition parties on whether they are going to get seats or not. They are also wondering how many seats DMK is going to provide for MNM.

However, it is concluded that DMK is approaching a party which has just 3% of vote bank due to the Election turmoil. Earlier, a report did rounds saying that DMK has provided 25 seats for the Kamal Haasan led party ahead of the assembly election.