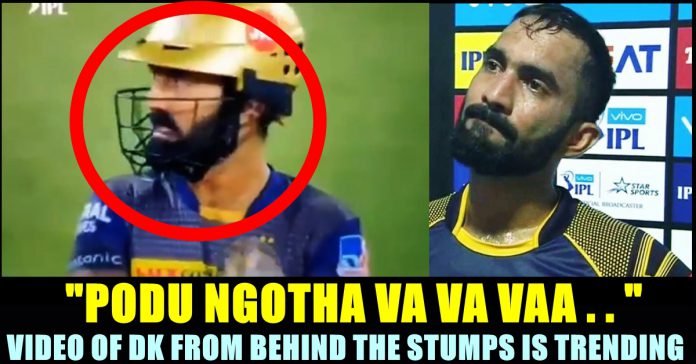 Dinesh Karthik and Varun Chakravarthy of Kolkata Knight Riders has made headlines several times for their on field chatter in Tamil language. Now, a phrase used by Dinesh Karthik to cheer the young lad of Tamil nadu has grabbed the attention of the Tamil speaking IPL fans. Despite of the terrible loss of the Kolkata Knight Riders team, the video of DK cheering is doing rounds with reactions saying that it’s an emotion.

Team Kolkata Knight Riders lost a match that required them to score just 31 runs off 30 balls with 6 wickets in hand and they lost the match by 10 runs. ‘Yes, disappointing. Played some really good cricket for most parts of the game, we looked comfortable in the chase, but they are a strong team, came back well and sad that it didn’t work out for us. Made a few mistakes, will need to sort it out. A perfect game needs to be bold, it came to cost us in the last 10 overs of the game ” said KKR captain Eoin Morgan.

Many fans of the Morgan led team left dejected and are expressing their emotions through social media platforms. Meanwhile, the particular video of Dinesh Karthik cheering Varun in local Tamil while he was bowling is trending all over the internet. The stump mic which was kept to record the rattle of stumps for the Television audience, recorded Dinesh Karthik’s chatter too.

In the 13th over of the batting innings of Mumbai Indians, while Varun Chakravarthy was about to bowl his second delivery in the over, Dinesh Karthick could be heard shouting “Podu ngotha Va Va Vaa . . ” to cheer his Tamil nadu mate. At that time Mumbai were scored 91 runs by losing 3 wickets.

Check out some of the reactions for this gesture of DK below :

Dear commentators, kindly maintain silence when Varun is bowling, we would like to hear the tips Dinesh Karthik giving to Varun in Tamil. So give a break to your commentary when Dinesh karthik speaks.
#KKRvMI@unacademy #LetsCrackIt #UnacademyAskTheExperts

This is not the first time Dinesh using the language to interact with his teammates. During International matches, while playing with Tamil nadu players like Ashwin, Dinesh made the headlines for giving him suggestions and appreciations in Tamil. His one liners behind the stumps during the last season has a separate fan base as well. Not only Karthik, even Dhoni and other Indian wicket keepers would use their respective regional languages to prevent their foreign opponents understanding their game strategies.