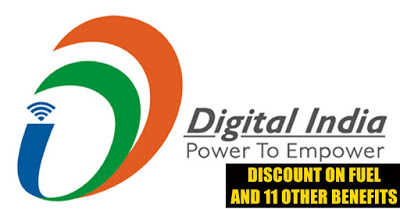 Discount On Petrol And Diesel Prices And More. Read Below.

The aftermath of demonetization is running wild across the country. While the opposition parties are trying to draw limits on demonetization the ruling party is strictly against it. While this along with the self declaration of undisclosed assets has brought to light many scandals this still proves to be a headache for many normal citizens who wants to exchange the legal currency they have in their hand.

Though the demonetization run has brought a financial crunch, the ruling government doesn’t have ideas to back off. Apart from strictly sticking to its demonetization policy it has also been constantly implementing policies which supports and increases the effect of demonetization. One of such is the  Digital India campaign.
Finance Minister Arun Jaitley today announced 11 measures that the government has taken to expedite the digital switchover, including a 0.75 per cent discount for those who purchase petrol or diesel through digital payments.

The below are the 11 measures as said by the Finance Minister.

1) Suburban train passengers who book their tickets digitally would end up getting a discount of 0.5% which would be amended from the 1st of January,2017.
2) Railway passengers who book their tickets online would get an insurance coverage of Rs.10 lakh.
3) These passengers will also get a 5% discount om accommodation,catering and retiring room offered at the railway stations across India.
4) Card transactions upto Rs.2000 would be devoid of any service charge.
5) People paying for general insurance premium would get 10% or 8% discount on life insurance if the premium is paid online.
6) Government bodies would be forbidden to make any transaction fee on digital payments.
7) People, who pay digitally and use Smart TAGs and RFID facilities at toll plazas on national highways, will get a 10% discount.
8) People who pay digitally for fuel would attract a 0.75% discount in the price.
9) The government will be providing 2 Point of Sale machines for free to each village that has a population of over 8,000. Around 75 crore people will get access to these machines.
10) Excessive cash usage may lead to malpractices and is thus discouraged. Big payments which are done digitally would attract good offers.
11) Any misconduct will be dealt with seriously.

Previous article100 KG Gold and 90 Crores Cash Seized After A Cross City Raid In Chennai.
Next articleAIADMK Head Office Wants Sasikala To Be The Next Amma.

On seeing the CCTV footage that surfaced on Wednesday showing a group of people, presumably the teachers and wardens, carrying Srimathi from the spot...