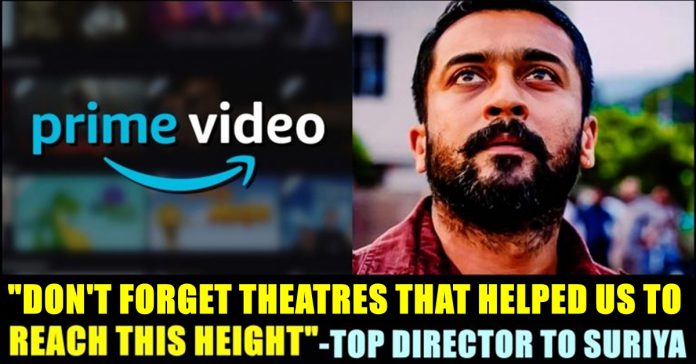 Along with theatre owners and distributors, filmmaker Hari who worked with Suriya in four of his blockbuster films also expressed his disappointment over Suriya’s decision on releasing “Soorarai Pottru” in Amazon Prime on 30th of October. He wants him to reconsider the decision he made and suggested him to release the film on theatres.

On the auspicious day of Vinayagar Chathurthi, Actor Suriya came up with a biggest announcement in Tamil cinema history. The actor who earlier released his “Ponmagal Vanthaal” in OTT and became the first ever producer to make the brave move, has made it public that his most awaited coming of age biographical drama “Soorarai Pottru” is also going to stream in Amazon Prime from 30th of October. As soon as he made the announcement, mixed reactions are pouring from all the directions of Internet.

Tamil nadu theatre association head Tirupur Subramaniam has condemned actor Suriya by saying that he is kicking the ladder by using which he climbed the height he is today. Announcing about it in his official twitter account, actor Suriya who also produced the movie, stated that the COVID 19 pandemic as the main reason behind his decision. The actor also pledged that he will complete acting in at least two films before the pandemic ends and will make people happy by releasing them in theatre. He also announced that he will be donating Rs.5 Crore to the people who are fighting against COVID 19 from the money he got for releasing “Soorarai Pottru” in “Amazon Prime”.

Followed by several theatre owners, Director Hari made the press release by saying that he is suggesting few things to Suriya as they both worked together. “As a fanatic, I would always loved watching your films in theatre. Not in OTT. We grew this big in our industry only because of the applauses of our audience. Don’t forget it” Hari said in his note.

“Cinema is our god who could exist anywhere in the world. But it gets the real value when it is streamed in theatres which is similar to temples for God. That is when the hard work and creativity of creators gets recognised. I have experienced the hardship of a producer. But if you reconsider you decision now, you name will last long in the History of cinema” Hari said to Suriya.

Director Hari puts out a strong request to @Suriya_offl, asking the star to reconsider his decision to release #SooraraiPottruOnPrime. pic.twitter.com/dPtqhxzBD1

Director Hari and Suriya worked together in “Aaru” and in the Singam series. They also rumoured to work together in “Aruva” post lockdown. As far as “Soorarai Pottru” is concerned, the film which is believed to be a biographical picture of Air Deccan founder G.R Gopinath, is touted to be a coming of age biographical drama. Directed by Sudha Kongara, the film has G.V Prakash as musician. It is notable that Gopinath is a retired Captain of the Indian Army, an author, and also a politician.

Previous articleVanitha Vijayakumar Replied To Those Who Mocked Her During Her Tough Time !!
Next article“First Reduce Your Belly”- Follower !! Check This BB Star’s Reply

Hashtag "IPL 2022" trended in the micro blogging social media site with fans discussing about which team would retain which four players after the...

Anirudh In Big Trouble For Composing Music For Darbar !!

Superstar Rajinikanth’s “Darbar” is all set to release during Pongal holidays. As soon as the trailer of “Darbar” released, it impressed many fans across...