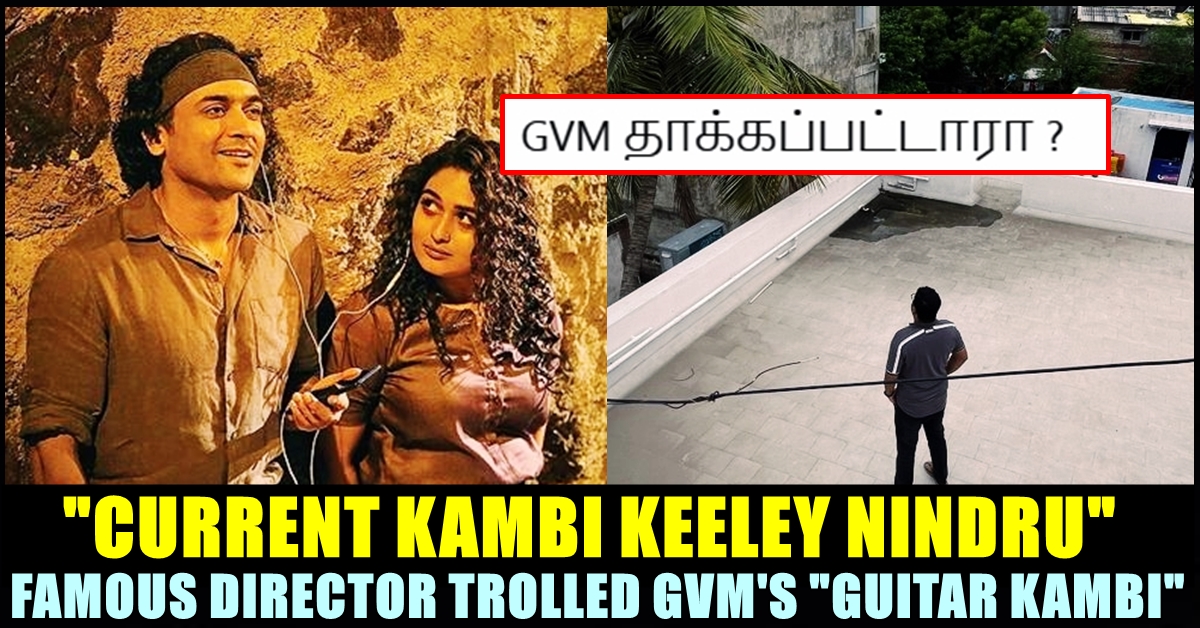 Director C. S Amudhan who is known for making the only two parody movies of Tamil film industry, uploaded a tweet trolling the title of Gautham Vasudev Menon’s recently released short “Guitar Kambi Mele Nindru” that took place in Mani Ratnam’s anthology film that was made for Netflix. Uploading a picture of himself standing at a terrace, the filmmaker captioned it in Tamil with the similar wordings of the title of GVM’s directorial. The post is going viral with various kind of reactions from his followers. Few even started assuming that Amudhan is all set to make the third part of his parody film “Tamizh Padam”.

The Suriya starrer had much expectations among the all prior release and received mixed reactions from fans after the release. The film revolved around a musician played by Suriya who falls in love and out of it and grows up to narrate it as an incident that shaped his life. Fans of the genre and actor Suriya loved the film whereas others criticized it citing various reasons. It became a subject to controversy after Gautham decided to have Karthick as musician who was accused by singer Chinmayi during the Me Too movement.

Now, director C.S Amudhan, in his twitter post, uploaded a picture of himself standing in a terrace and wrote “Current Kambi Keeley Nindru” as his caption. Check out his post below :

Most of his followers who commented on the post, trolled the GVM’s directorial and singer Chinmayi laughed at the comment section as well.

This is how I felt after watching the 'original'!!! 😂 https://t.co/6X8UdpjGob

Not Only Shivani, These Two Other Tv Stars Are Going To Pair Vijay Sethupathi !!
TN Mother Was Arrested For Attacking 2-Year Old Child After Having An Affair With A Man