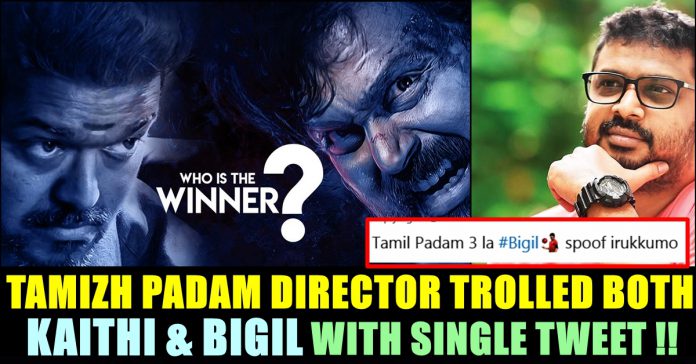 Bigil and Kaithi hit the screens today and fans of Tamil cinema are busy booking tickets for both the films. Kaithi having Karthi in the lead, was directed by “Maanagaram” fame Lokesh Kanagaraj who is going to direct “Bigil” Vijay’s next film. Both the movie’s respective production houses announced the release date on the same day and announced it as same date date as well.

Twitter war arouse between fans as both the movies are fighting to get more number of screens across Tamilnadu. Promotional activities from both the movies were started and it is also in full swing.

His tweet read as “Can’t wait for tomorrow. Clash of the heavyweights of South India. So many are envious of the path to success. Tamilnadu’s destiny is at stake. Both sides calm down. In the end Tamil will win. #VijayHazareFinals”

Can’t wait for tomorrow. Clash of the heavyweights of South India.

So many are envious of the path to success.

Tamilnadu’s destiny is at stake.

Both sides calm down.

In the end Tamil will win. #VijayHazareFinals

Check out some of the reactions from his followers :

“Kaithi” which looks like a crime drama has Karthi as a released prisoner. On the other hand, “Bigil” has actor Vijay in three different getups. What do you think on this tweet of C.S Amudhan ?? Comment your views !!

Previous articleJUST IN : Atlee Answers To Negative Review Of BIGIL !!
Next articleAshok Selvan Flirts With Vani Bhojan Publicly !! Clarifies After Getting Trolled !!

Controversial personality Meera Mitun said that actress Priya Anand copied her face and the actress reacted to the video through her official Instagram account....