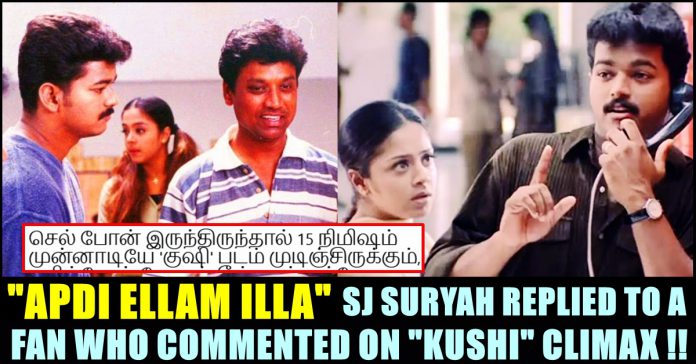 Director SJ Suryah is pretty much interactive with his followers in Twitter since the lockdown implementation. The filmmaker cum actor has been reacting to the fan made posters, answers to the questions of fans and interacts with his fellow cinema artists as well. Most recently, a reply he made to a social media user’s comment on the climax of his second film Kushi, has gone viral among the users of the micro blogging social media site with reactions lauding the filmmaker’s screen writing skills. Fans also started demanding a sequel for the romantic film which had Vijay and Jyothika in the lead roles after seeing his reply.

This tweet garnered the attention of the filmmaker himself who said that there are ways to extend the film even if there was “cell phones” during “Kushi” times. “Nothing like that. It will work the same way if we showed that they both lost their cell phones due to mental agony. If they called their friends, they should say that both of them had left to station. That’s it. cool buddy. We should build the scenes, according to our climax” SJ Suryah said.

Another follower asked why Jeni and Shiva didn’t celebrate their birthdays in the film, despite of being born on the same day. “Adhu interval la sanda pottangala summer holidays la they gone to their native places ….. they might have or might not have celebrated because of their love fight …. That’s y Ok ???” Suryah replied.

Adhu interval la sanda pottangala summer holidays la they gone to their native places ….. they might have or might not have celebrated because of their love fight …. That’s y Ok ???? … 😉sjs https://t.co/5fdupr7D6q

Check out some of the reactions for these replies of SJ Suryah :

Surya made his directorial debut with Vaali in 1999, success of which catapulted him to stardom. His other notable films include Kushi, New, Anbe Aaruyire and Isai. He made his acting debut with New and went on to act in films like Kalvanin Kadhali, Thirumagan, Vyabari and has also worked as an Antagonist in films such as Spyder and Mersal etc.

He is the director who gave the career break to both the top rivals of Tamil cinema Ajith Kumar and Vijay. Now the director is busy in acting for other directors. Last seen in horror- dark comedy “Nenjam Marappathillai”, Surya’s “Iravakaalam” is waiting for its release. Apart from that he is also acting in a fantasy movie “Bommai”, Venkat Prabhu’s “Maanadu”, Sivakarthikeyan’s “Don” etc.

Previous articleYashika Answered To The Inappropriate Questions Of Perverts !!
Next article“Nadodigal” Actress Shanthini Accused Former Minister Of Cheating Her !!

Suicide of the student of Sathyabama college, has been the talk of the town. The unfortunate event has created a chaos among the students...