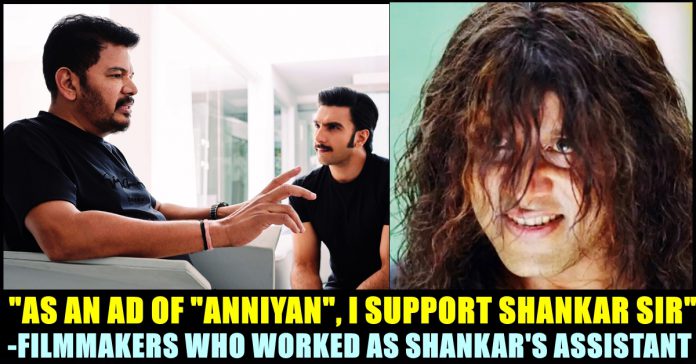 Responding to the statement released by “Anniyan” producer “Aascar” Ravichandran, Director Shankar came up with a press note saying that the story of the Vikram-starrer belongs to him and said that everyone who are associated with the project was aware of it. He also mentioned that the film released with a tag saying “Story, Screenplay, Direction by Shankar”. As soon as the press not released, a number filmmakers including Simbu Devan, Arivazhagan came up with tweets expressing their support for the filmmaker.

After the official announcement from director Shankar on Anniyan’s Hindi version surfaced, a official press note from V. Ravichandran of Aascar Films terming the project as “illegal” has shocked the fans. In his note, Ravichandran said that the ownership of the film’s storyline belongs to him and said that Shankar remaking it in other language without his permission is totally illegal.

It all started when Shankar officially announced about his upcoming projects with Bollywood actor Ranveer Singh. The filmmaker uploaded a tweet on Wednesday saying that he feels extremely happy to announce about his next project which is a remake of “Anniyan”. “In this moment, no one will be happier than me, bringing back the larger than life cinematic experience with Ranveer Singh in the official adaptation of cult blockbuster Anniyan.” the filmmaker’s tweet read.

Ravichandran, in his statement, said that he purchased the film’s storyline from writer Sujatha and added that the necessary records are available. “I am the whole and sole owner of the rights of the storyline. As such, any such adoption or remaking or copying the main plot of the said movie, without my permission, is totally illegal.” read the statement of the producer. Read : Anniyan Producer’s Emotional Letter To Shankar After The Remake Announcement !!

Now, responding to the accusation, Shankar, in his statement said “I am shocked to receive your mail dated 14.04.202I stating that you own the storyline of the movie Anniyan. In this context, I submit that the movie was released in the year 2005 and everyone associated with the movie were aware that the script and storyline belongs exclusively to me and in fact the
movie was released with the tag: Story, Screenplay and Direction by Shankar. I have not assigned in writing any script or screenplay to any person, and continue to retain the right to exploit the script in any manner I deem fit. As the admitted author of the literary work, my rights cannot be interfered with under any circumstances.” said Shankar and denied the involvement of Sujatha in the story of “Anniyan”.

“I am rather surprised to see the reference to late Sri Sujatha as he was engaged by me only to write dialogues for the film and was accordingly credited. He was not involved in the script, screenplay or characterization in any manner, and there is no scope beyond his engagement as a dialogue writer.” his statement read.

“Given that the script vests with me, I am absolutely entitled to exploit the same in any manner I deem fit. Infact, you/your entity does not have the right to remake or make any derivative rights for “Anniyan”, as the said rights have not been granted to you in writing. In the absence of any
assignment in writing from me, there can be no basis whatsoever to even assert that the “storyline” vests with you.” Shankar said through his statement.

“You as the producer have gained substantially from the success of the film “Anniyan”, and are needlessly trying to unjustly enrich yourself even in my future endeavours which have no correlation to you. Needless to state, I can only hope good sense will prevail upon you after this clarification and you will stop agitating such baseless claims. This reply is issued without prejudice, and to clarify the actual situation of me as a director and writer being subject to such avaricious and illegal claims to needlessly attempt to jeopardise my future projects.” he added.

“As an AD of #Anniyan, I stand with Shankar Sir. #ISupportDirectorShankar” said director Arivazhagan in his tweet.

Previous article“Draupathi” Heroine’s Opinion About “Karnan” !! WATCH
Next articleMS Dhoni Could Get Banned After Tonight’s Game !! Check Why

“Is It Good To Mast*rbate Once In A Month ?” -Follower Questioned Chinmayi !! Singer Replied

Ina  question and answer session Chinmayi conducted with her Instagram followers on Friday, she received various kind of questions from different followers. The singer...

A hashtag saying "அன்றே சொன்ன ரஜினி" is being trended by the fans of the actor in Twitter since past two days. It is a...

The number of crimes against women in India is increasing day by day. The series of recent happenings of rape and murder shook the...