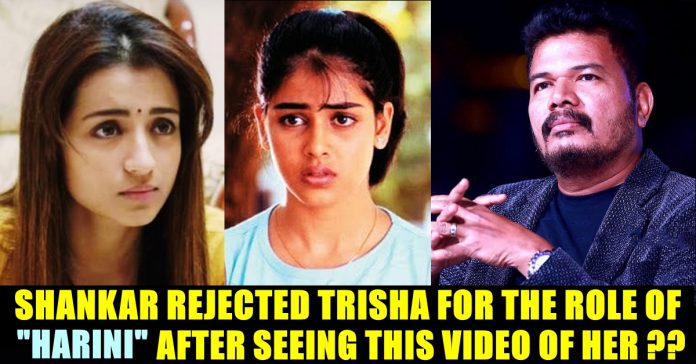 Director Shankar, one of the prominent filmmakers of Tamil film industry, is currently busy working on the sequel of his blockbuster film “Indian”. The film is going to have Kamal Haasan in the lead role with actors Siddharth, Rakul Preet Singh, Kajal Agarwal, Priya Bhavani Shankar in the supporting roles. Throughout his career, the filmmaker is pretty much choosy in selecting the lead actors for his film. He introduced former Miss World Aishwarya Rai to Tamil cinema by casting her in his film “Jeans”. He also casted her in his science fiction “Enthiran”. He also introduced Genelia, Sandhiya and many other actresses to the Tamil film industry.

Now, an assistant director of the filmmaker named Muthu Vadugu who assisted him in till “Boys”, in an interaction with a youtube channel, has revealed that Shankar rejected actress Trisha when he showed one of her videos to him to make her cast in his “Boys”, actors of which were being searched at that time.

Muthu Vadugu said that the process of choosing cast for the film became hectic as everyone were new. “We gave advertisement for the film in news papers and were receiving sacks of letters in daily basis. We assistant directors were separating the letters, considering the looks of the applicants. But we couldn’t get satisfied with any of the applicants” Muthu Vadugu said in the interaction.

“Apart from that, we were searching for lead actors by visiting various places and colleges.” said Muthu Vadugu in the interaction. He further revealed how actor Siddharth bagged the lead role with the recommendation of writer Sujatha. “Sujatha suggested Shankar said to consider Siddharth who was working as an assistant director of Manirathnam at that time” Muthu said.

While talking about how they searched for the heroine, Muthu Vadugu revealed the incident in which dirmiss ector Shankar rejected Trisha for the role played by Genelia. “We attended a Miss Madras event that took place in Guindy and were focusing the girl who bagged the title. A girl who won the title in the previous year of Miss Madras, attended the event to present the crown for the winner. We got excited on seeing her and started capturing her with our handy camera” said Muthu Vadugu.

“We were very much confident and hoped for Shankar sir to select her as the heroine of the film. He watched the complete video we shot and hasn’t reacted anything. He who felt that something is missing in the girl, asked us to search for another actress.” Muthu Vadugu said and revealed that the girl whom Shankar rejected is Trisha.

Trisha debuted in Tamil film industry through 1999 film “Jodi” in an uncredited role and acted as a heroine for the first time in Suriya’s “Mownam Pesiyathe”. She rose to fame after pairing opposite to Vijay, Vikram, Ajith in Gilli, Saami, Greedam respectively.

Patient Tied To Bed In Hospital Due To Non-Payment ??

In the incident which grabbed the attention of the Chief minister of Madhya Pradesh, a hospital allegedly tied an 80 year old patient to...

Popular stand up comedian Aravind SA, who rose to fame through trolling the "Lungi Dance" song line by line in one of his show...