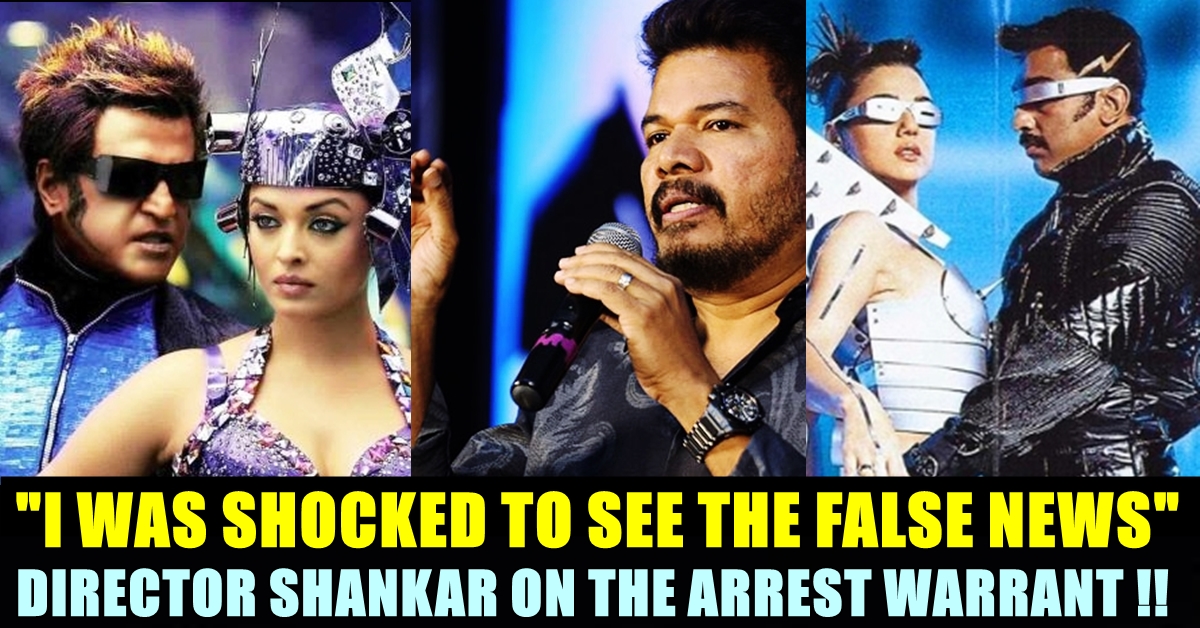 Director Shankar came up with an official press release providing a clarification on the arrest warrant about which a news broke out on media on Sunday. The Director has said that a glitch has occurred in the online court reporting and confirmed that no arrest warrant was issued against him. In his note, Shankar has said that the glitch is being corrected and requested the media to circulate the news to stop the false news from spreading.

Earlier, a report surfaced saying that Director Shankar who is known for making some of the significant films in Tamil cinema history has been subjected to non bailable warrant by a magistrate court for not making his presence repeatedly, in a case related to copyright violation filed by writer Aarur Tamil nadan over the 2010 released science fictional movie Enthiran, starring Rajinikanth-Aishwarya Rai.

In the year 2010, writer Tamil nadan filed a case in the Madras high court alleging that the story of Shankar’s “Enthiran” was a copy of his story “Jugiba” which was first published in a magazine named “Iniya Udhayam” in the year 1996. The story also published in a novel “Tik Tik Deepika” in 2007, according to the petitioner.

Aarur Tamil nadan filed cases under Section 420 (cheating) of the Indian Penal code and other sections of the copyright act. “The makers of Endhiran has earned a huge monetary benefit (in crores) from the film, which was originally my idea and creation” the complaint of the writer said. In 2019, Director Shankar approached Madras High court to quash the proceedings and cases filed against him. However, the court turned his plea down in the June month of the same year.

The filmmaker also approached the Supreme court and it dismissed his plea as well. On Sunday, a news surfaced saying that a magistrate court that has been hearing the proceedings since 2017 has issued a non-bailable warrant to the director. The order was issued by Judge Rosyln Durai of the second Metropolitan Magistrate on Friday and demanded the filmmaker to appear in court before 19th of February, said the report.

The news has came in as a shock to the members of Tamil film industry and the fans of it. Now, director Shankar himself came up with a press note completely denying the reports. “My advocate Mr Sai Kumaran has approached the Honourable Court today and brought this to the Court’s attention. The Learned Judge was pleased to immediately confirm that no warrant has apparently occurred due to a glitch in the online court reporting, which is presently being corrected.” said Shankar who started his press note by saying that he got shocked on seeing the false news on his non-bailable warrant issued by a court.

“I am very surprised to see such false news being circulated without any verification, and the same has caused needless anguish to my family and well-wishers. I request this clarification will be carried by all media to ensure that such false news does not spread any further.” he added.

Director Shankar debuted to Tamil film industry through a heist thriller “Gentleman” and went on to claim fame through directing some of the socially responsible films such as “Mudhalvan”, “Indian” etc.

He gained widespread acclaim after directing Superstar Rajinikanth and Aishwarya Rai in “Enthiran” story of which has been subjected to controversy now. The film revolved around a scientist named “Vaseegaran”, played by Rajinikanth and showed what will happen if a machine gets to have emotions and fell in love with a real human being.

The film became a huge hit across the nation and the sequel of it released in the year 2018. “Enthiran”, after being stalled in the development phase for nearly a decade, the film’s principal photography began in 2008 and lasted two years and managed to get a theatrical release only during first October of 2010. Enthiran emerged as the highest-grossing Indian film of 2010 and is among the highest-grossing Indian films of all time. It won two National Film Awards, three Filmfare Awards, seven Vijay Awards and two Screen Awards. Shankar was initially planning to do the film by having actor Kamal Haasan and Preity Zinta in the lead role. However, the project got shelved due to unkown reasons.