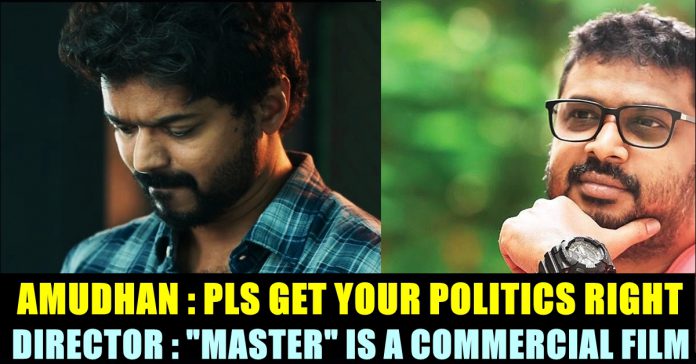 Director Rathnakumar who is known for directing films such as “Meyaadha Maan”, “Aadai”, worked as an additional screenplay writer for the film high budget Vijay starrer “Master”. Being a best friend of Director Lokesh Kanagaraj, Rathna kumar is also known as an ardent fan of actor Vijay. Now, in a phone call interaction with “Galatta” youtube channel, the filmmaker has replied to the criticism of director C.S Amudhan regarding “Master”.

After watching “Master”, Director C.S Amudhan who is known for directing the only parody film of Tamil film industry, came up with a tweet criticizing Lokesh Kanagaraj. The filmmaker said that the film lacked political correctness and criticized the “Vikram” maker for the flaws he made in Master’s caste and feminism angle. Without mentioning the filmmaker’s name and tagging his official twitter account of him, Amudhan added a lyric from the song “Let me tell a kutti story” to confirm that he is talking about “Master” and Lokesh Kanagaraj.

Amudhan who suggested Lokesh to hire a couple of script supervisors, said that it won’t cost him much while making a film with humongous budgets and with Superstar actors. He wanted Lokesh to get his politics right, especially the feminist and caste angles as he is influencing so many minds with his film and concluded his tweet with “Konjam try Pannu maapi”, a lyric from “Let me tell a kutti story” song.

“Can our young filmmakers who get to associate with superstars & are able to get humongous budgets pls get their politics right..especially the feminist & caste angles. A couple of script-supervisors won’t cost you that much. U r influencing so many minds, konjam try pannu maapi!” the filmmaker’s tweet read.

Can our young filmmakers who get to associate with superstars & are able to get humongous budgets pls get their politics right..especially the feminist & caste angles. A couple of script-supervisors won’t cost you that much. U r influencing so many minds, konjam try pannu maapi!

It was believed that Amudhan mentioned a scene where JD (Vijay) would say that caste and religion should be avoided completely during one’s academic period. When Savitha (Gouri Kishen) said that she had categorized all the students according to their caste and religion, JD would reply saying “That’s not needed. We should avoid it from now itself to prevent it from following us in the future”

Though it was kept in the film with an intention to avoid casteism in our country, in one way, the dialogue also stands against the reservation system which helps many students in improving their educational qualification. Regarding “Feminism”, Amudhan is believed to be mentioning the cuss word uttered by JD during the interval to express his anger towards Bhavani.

Replying to this criticism of Amudhan, Rathna, in his phone call interaction with Vidhya, said “I have also saw that tweet. We didn’t make this film with the flow. We have made enough research before going on floors. Only after four, five process we are making an artist to utter a dialogue. The scene where Vijay sir speaking against molestation and against the restriction on women clothing is itself a huge growth as far as the films that got released years ago are concerned. So there are chances for the flaws to get rectified in the coming years as well” Rathnakumar said.

“Master is not a documentary or biography. It is a mainstream commercial film. We have made the film with what he have researched. Regarding the “cuss” word that allegedly attacked a particular gender, we muted it while giving the cut to censor and it got featured in the Amazon cut by mistake. We regretted for it. We are not defending it. We accept the criticism and will change in the future” the writer said.

Hear the audeo below :